Formulations of Official Kiyev About Karabakh Conflict do Not Contribute to Peaceful Settlement Process: Anna Naghdalyan 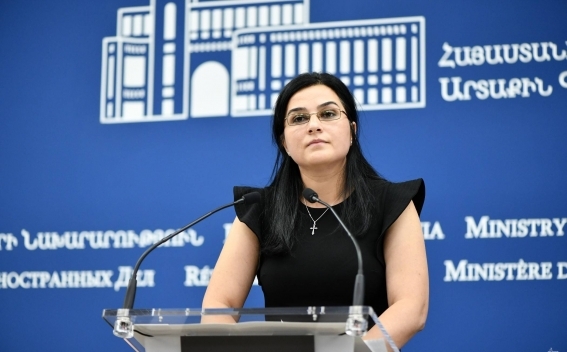 The formulations of official Kiyev about Nagorno-Karabakh conflict do not contribute to the peaceful settlement process, spokesperson of Armenia’s Foreign Ministry Anna Naghdalyan told Aysor.am.

"All the formulations about Nagorno Karabkh conflict, which contradict the formulations of the OSCE Minsk Group co-chairmanship, which is the sole structure having international mediatory mandate, and which are unilateral do not contribute to the peaceful settlement process," Naghdalyan said.

Earlier Ukrainian Foreign Ministry, "taking into consideration the various applications of partners" released a statement about the rule of visiting Artsakh, Abkhazia add South Ossetia, reaffirming the statement made earlier.

Kiyev warned its citizens to be guided by the legislations of Azerbaijan and Georgia while visiting Artsakh, Abkhazia or South Ossetia.

"Ukrainian Foreign Ministry consistently urges its citizens to be guided by the legislations of Azerbaijan and Georgia while making a decision to travel to Nagorno Karabakh, Abkhazia and South Ossetia. The violation of the mentioned legislations supposes administrative and criminal responsibility," the Ukraine’s Foreign Ministry's statement read.

The official Kiyev’s statement mentions about the belonging of Nagorno Karabakh to Azerbaijan and Abkhazia and South Ossetia to Georgia.