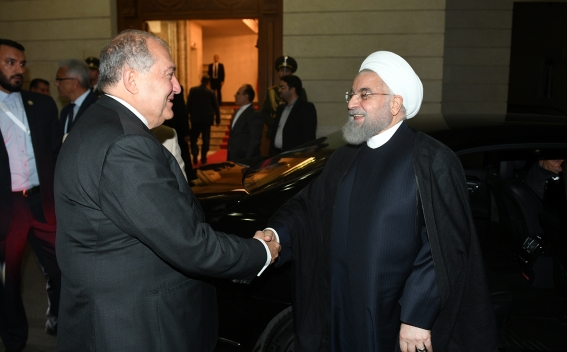 President of Armenia Armen Sarkissian hosted President of Iran Hassan Rouhani who arrived in Armenia to take part in the extended format session of the Supreme Eurasian Economic Council as an invited head of state, the Armenian President’s Office told Armenpress.

Welcoming the Iranian President’s visit to Armenia, President Sarkissian noted: “Interesting times come, but we had interesting times together for thousands of years. And if people search for examples of brotherly, friendly relations, the history of our peoples is the vivid example. As the President of the Republic I am ready to have my small contribution to this big work”.

In his turn Iranian President Hassan Rouhani thanked President Sarkissian for the warm welcome. “Fortunately, Armenia and Iran have formed very close and friendly ties for centuries. I am very happy that today Armenia chairs a very important event, and I am the guest of that event”, he said.

The meeting of the two Presidents was followed by the extended format meeting with the participation of the delegations of the two countries.

“I want to reiterate once again to our partners that we had a very interesting meeting which mainly focused on the fact that the Iran-Armenia relations have much greater potential than they are able to utilize”, the Armenian President said, adding that his staff is ready to contribute to further deepening and strengthening the historical, friendly relations.

“Tomorrow Armenia will chair a very important event which will be attended by the leaders of the countries of the region and outside it”, Hassan Rouhani said. “We are very happy for the current friendly and good relations of Iran and Armenia. The Eurasian Economic Union will make closer this cooperation. Nearly in a month we will practically enter into the stage of creating relations with the EAEU. Of course, this cooperation can further strengthen our commercial relations”. Rouhani expressed hope that the Yerevan summit will contribute not only to the cooperation with the EAEU member states, but will also further intensify the relations with Armenia.

The meeting participants exchanged views on the Armenian-Iranian agenda and the relations between the two states. The two Presidents agreed that Iran and Armenia have a greater cooperation potential than they use in reality. It was stated that the free visa regime contributes to the development of the bilateral relations and tourism. The Presidents attached importance to the effective operation of free economic zones in terms of developing the commercial ties.

President Sarkissian said the cooperation in energy field can be much broader and proposed to pay great attention to these directions, especially when Iran has great achievements in the solar energy sector.