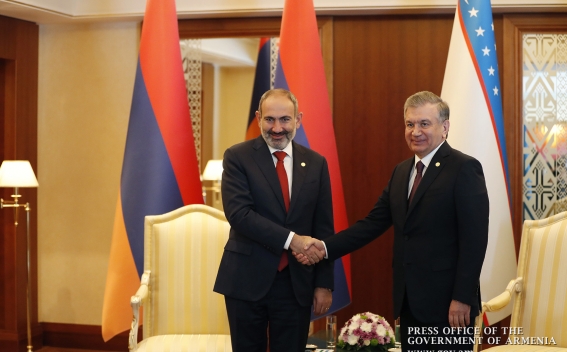 Prime Minister Nikol Pashinyan, who is in Turkmenistan on a working visit, on October 11 met with President Shavkat Mirziyoyev of Uzbekistan in Ashgabat.

The Prime Minister Pashinyan said he was happy to meet with the President of Uzbekistan and discuss ways of strengthening the ties between the two states and friendly peoples. He highlighted the first meeting held in similar format ever since Armenia’s independence in the context of both sides’ willingness and determination to reinvigorate the bilateral relations. Prime Minister Pashinyan assured of Armenia’s commitment to developing a new agenda of bilateral relations and implementing it in a swift and effective manner.

Greeting Nikol Pashinyan, the President of Uzbekistan said his country keen to develop multifaceted ties with Armenia, and the meeting should be used to pursue the ongoing high-level political dialogue, tap the potential in bilateral relations and boost exchanges between the two countries. In this context, Shavkat Mirziyoyev suggested looking at the possibility of establishing an intergovernmental commission.

Concurrent with the idea voiced by the President of Uzbekistan, Prime Minister Pashinyan expressed confidence that the commission could be formed soonest possible to develop a legal framework for closer interaction. Nikol Pashinyan praised the Uzbek government’s caring attitude towards the Armenian community.

The parties reiterated their shared willingness to build partnerships in the political, economic, cultural, humanitarian spheres, and went on to discuss opportunities for implementing joint programs in the aforementioned areas.

Cooperation in light industry, banking, information technologies, and agriculture was considered promising in terms of activating economic ties. The interlocutors exchanged views on developments in the two countries. Imparting his positive impressions of the large-scale reforms going on in Armenia, the President of Uzbekistan dwelt on the changes underway in Uzbekistan’s agriculture, foreign trade and other sectors of the economy.

The interlocutors stressed the importance of reciprocated high-level visits. They expressed readiness to take concrete steps in that direction in the near future.