Armenia’s PM Condemns Distortion of History by Azerbaijani President, Describes it As Disrespect Toward Armenia and Heads of CIS Countries 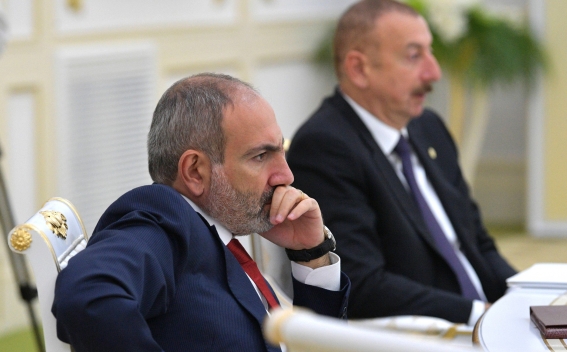 “We are against biased interpretation of historic developments but unfortunately we have seen such attempts in the speech of Ilham Heydarovich,” Pashinyan said, in response to Aliyev’s claims that Armenian public, political and military figure Garegin Nzhdeh was a fascist.

“An impression from Ilham Aliyev’s speech is that Hitler had a secondary role in the Great Patriotic War and Garegin Nzhdeh was the leader of fascist movement,” the PM stressed, adding that Nzhdeh was fighting against Turkish occupation of Armenia, against Armenian Genocide organized and conducted by Turkey.

The Armenia PM also stressed that in 1918 with many Russian officers Nzhdeh was heading one of the important sectors of the front during the Armenian-Turkish war.

“The knowledge of objective assessment of the history is very important. It is said that Nzhed died in Vladimir jail. Many soviet figures died there. Do we consider all those convicted from 1937-1950 people’s enemies? If so many outstanding figures were convicted during that period and died in jails, but it does not mean that what they did is a fact,” Pashinyan said, adding that he considers improper to use this format for distortion of history to bring tension to the summit.

“The words of the Azerbaijani president is a manifestation of disrespect first of all toward Armenian people, heads of states and peoples present here. I am sorry for such tension, I am not the author of it,” Pashinyan said.

In his speech Aliyev said that Armenia glorifies fascism and the proof of it is the monument to “fascist Garegin Nzhdeh in the downtown Yerevan.”