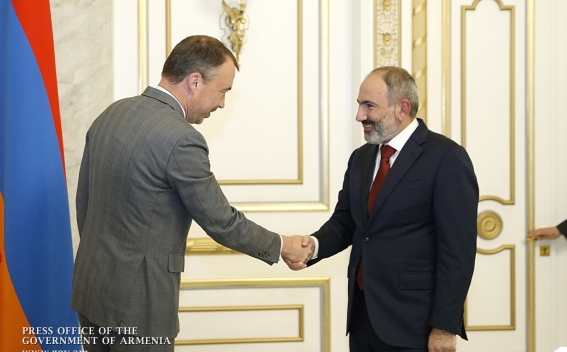 Noting that Armenia is eager to develop relations with the European Union, the Prime Minister emphasized that high-level official contacts may promote the ongoing effective dialogue and boost the dynamics of cooperation. According to Nikol Pashinyan, the EU is Armenia’s most important partner in the large-scale reform process underway in our country, and the Government is firmly determined to bring it to successful completion.

Toivo Klaar assured of EU’s willingness to deepen partnership with Armenia and the Union’s readiness to continue assisting the Armenian Premier and his government with the ongoing democratic reforms.

Nikol Pashinyan and Toivo Klaar exchanged views over the Nagorno-Karabakh conflict settlement. The Prime Minister stressed that Armenia looks forth to an exclusively peaceful settlement and is committed to the talks underway in the OSCE Minsk Group Co-Chairs’ format.

The EU Special Representative for the South Caucasus and the Crisis in Georgia commended Armenia’s steps towards at a peaceful resolution, noting that the European Union supports the OSCE Minsk Group Co-Chairs’ efforts.