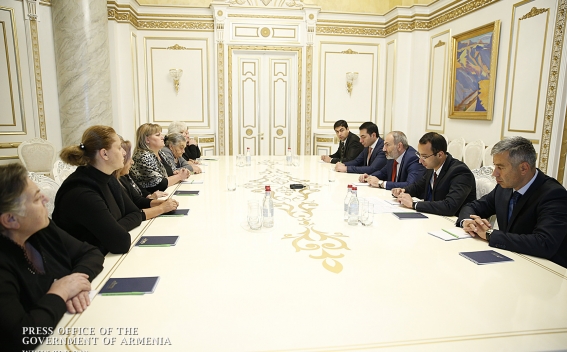 The Prime Minister said: “I am pleased to meet you. I apologize for the delay in the meeting, but you may be aware that my work schedule was very busy in recent months. Today we are ready to discuss all issues of shared concern. But to begin with, I can say the following: during our previous meeting, I talked about the fact that the circle of beneficiaries of the Military Insurance Fund is expanding very rapidly, and you know that after our last conversation it was decided that the Fund should implement payments to families of those servicemen who died after January 1, 1998 and military personnel included in the first disability group.

As I said at a meeting held in front of the government building, in fact, we went 19 years back within a period of one and a half years in a bid to address the needs of a larger group of beneficiaries. Of course, our goal is to tackle the problem of all those eligible. But this requires some effort from us, and we, of course, will carry out this work.

I want to make one more remark, which I made during our previous conversation. In general, especially considering that many issues went unaddressed for many years, it is sometimes easier not resolve issues in Armenia, because as the saying goes “We are not from the same home, but we are in the same condition.” Sometimes it comforts us. When our problems are not solved, and we see that none of us have solved them, it comforts us, this is the logic of our national saying.

But when issues begin to be resolved from the very end, and move forward, even when we are a little far from this point, we begin to negatively relate to this process, thinking that the old logic of “We are not from the same home, but we are in the same condition” would be better preserved. And I understand why this is happening, because people think that maybe, by the same logic, the question will approach their threshold again and will not take this last step towards it. But I want to assure that we will do this and get to the very beginning.

I know that even in this case we cannot assume that all issues have been resolved, because, nevertheless, there are soldiers who died during the service, who are not yet considered beneficiaries, because there are different categories. Now the condition is that the incident should have been happened in the exercise of a combat duty, but the question arises here: should we consider those cases when say a soldier was killed in an accident on his way to combat duty? I think that such servicemen should also be considered a beneficiary.

Now we are dealing with this delicate issue. Suppose a soldier is not in a combat position, but somewhere in the rear and, say, the enemy shot from a mortar or artillery and the soldier died. Currently such soldiers are not supposed to be a beneficiary. First of all, we will solve the problem of these soldiers, after which we will consider the future.

There is another issue. Circumstances may differ in essence, but this does not mean that all accidents should fall into the same category. I say if the accident happened on the way to combat duty, the serviceman should be deemed as a beneficiary. There may be other cases as well.

You see, this is a question that needs to be discussed thoroughly and seriously for a long time, take a serious approach, but in one you can be sure that this issue is in the center of our constant attention and cannot be so that our government takes any step, in any way, with a gesture, it would show any disrespectful attitude towards the deceased, to the deceased during military service, or to any citizen, regardless of his status. But on the other hand, we also need to understand that this is inevitable, we are forced to make some formulations, introduce certain differences, compile some categories, there simply is no other option.”

The Prime Minister listened to the comments and concerns voiced by the mothers of perished soldiers and answered their questions. The mothers of deceased servicemen thanked the Premier for the meeting.