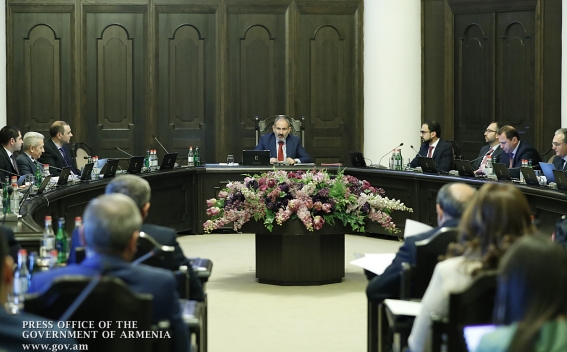 Prior to discussing the agenda items, the Prime Minister referred to Ryanair’s entry into Armenia’s aviation market: “I think it was a landmark event for our civil aviation as Europe’s largest carrier has made a decision to come to Armenia.”

Deputy Prime Minister Tigran Avinyan noted that Ryanair currently offers 4 destinations from Armenia to Europe - 2 for Italy and 2 for Germany. According to the Deputy Prime Minister, the Company’s pricing policy implies the cheapest and most affordable tickets.

Prime Minister Pashinyan noted in this connection: “It should be noted that heated debates were held in the government to solve this problem. I would like to emphasize that the Civil Aviation Committee and Zvartnots International Airport played a crucial role in this process, and have been very cooperative in resolving this issue. And, finally, the Government made a very principled decision, namely flights will be operated in those destinations that have not been serviced for the last 12 months, and the “duty of air” will be revoked for those destinations. It is also important to note that this applies to all air operators without exception. In other words, this is not an agreement with one airline.

We need to be consistent in our strategic perceptions, and sometimes, as time goes by, we will have to ignore pointless criticism and follow up our strategic decisions. This success story indicates that it will work. Let us state that from the outset there was a lot of pointless talk about budget money being wasted on business trips and so on. So let us state that perseverance is the key to managing decisions to the end.”

The Government approved a proposal to sign a financing agreement worth 10 million euros between the Republic of Armenia and the French Development Agency. The Irrigated Agriculture Development in Ararat and Armavir Marzes project will help develop modern irrigation through technical support and investment, as well as by removing barriers to water storage, facilitating to access irrigation infrastructure, land consolidation, advisory services and loans. The project consists of a EUR 4 400 000-worth of a technical assistance component and a EUR 5 600 000-worth of an investment component.

The meeting approved the proposal to sign a draft agreement on pension security for EAEU-Member States’ citizens. The document regulates the rights of EAEU-Member States’ citizens in the field of pension security. The draft agreement stipulates that employees’ pension rights shall be formed and exercised under the same conditions and in the same manner as is applicable to the pension rights of other nationals of the State of employment (where he / she has obtained work experience).