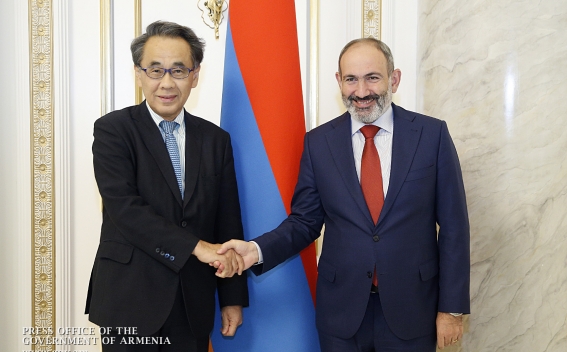 Prime Minister Nikol Pashinyan received Eiichi Hasegawa, Special Advisor to the Prime Minister of Japan who has arrived in Armenia to attend the Global Innovation Forum in Yerevan.

Prime Minister Pashinyan said Armenia highly values the political dialogue with Japan that has been developing dynamically since the establishment of diplomatic relations. He went on to note that the productive cooperation inherent in the interstate dialogue has serious potential for expansion. Thankful for the assistance provided to Armenia on the part of JICA, the Premier pointed out that the joint projects implemented so far have promoted bilateral ties in various sectors.

Eiichi Hasegawa thanked Nikol Pashinyan for the meeting and conveyed Japanese Prime Minister Shinzo Abe’s greetings and good wishes to his Armenian counterpart over the ongoing large-scale democratic reform. He said that the Government of Japan is interested in deepening relations with Armenia and stands ready to discuss partnership development prospects.

The parties exchanged views on infrastructure development programs, as well as on the furtherance of ties in the spheres of education, tourism and humanitarian projects.

Reiterating the invitation to Prime Minister Shinzo Abe to visit Armenia at his convenience, Nikol Pashinyan said he would be happy to host his Japanese counterpart and discuss ways of developing effective partnership between Armenia and Japan.