“Kazan document” was rejected by Azerbaijan itself, Yerevan reminds Baku 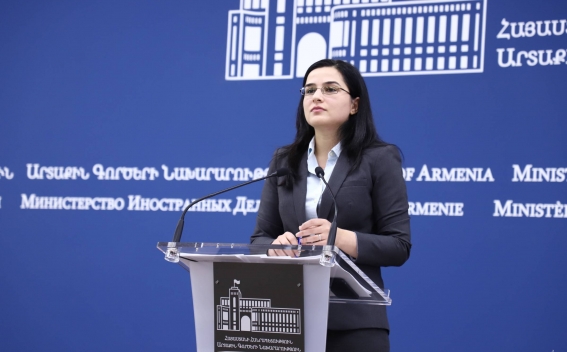 Spokeswoman of the Armenian Foreign Ministry Anna Naghdalyan has commented on the statements made by Azerbaijani Foreign Minister Elmar Mammadyarov in an interview to Izvestia newspaper, Panorama.am reports.

Below are the comments of the Foreign Ministry spokeswoman:

Question: In his interview, the foreign minister of Azerbaijan expressed “disappointment” with the recent meeting with the Armenian foreign minister, noting that the “Kazan document,” based on the Madrid Principles, is the basis of negotiations. Please comment on this.

Answer: As for the opinion of the minister of foreign affairs of Azerbaijan on the peaceful settlement of the Nagorno-Karabakh conflict, I would kindly like to remind, that Azerbaijan was the one to reject the “Kazan document.” We have consistently presented our principled stance and approaches to the Nagorno-Karabakh peace process, in which issues of security and status of Artsakh are of primary importance. We are consistently working on our agenda.

Question: In his interview, the Azerbaijani foreign minister also touched upon the issues of visitors of Armenian descent to Azerbaijan, presenting a unique way of solving the problem. How would you comment on that?

Answer: It is a common knowledge, that Armenians are target of discrimination in Azerbaijan. In fact, in his interview Azerbaijan's FM confirms this, acknowledging the existence of discriminatory policies towards people of Armenian origin, which has repeatedly been voiced by other states and international organizations, in particular the Russian Federation and the OSCE/ODIHR. According to the Azerbaijani official, the best way to manage the current discriminatory policy is to make every Armenian's entry to Azerbaijan a subject of negotiations.