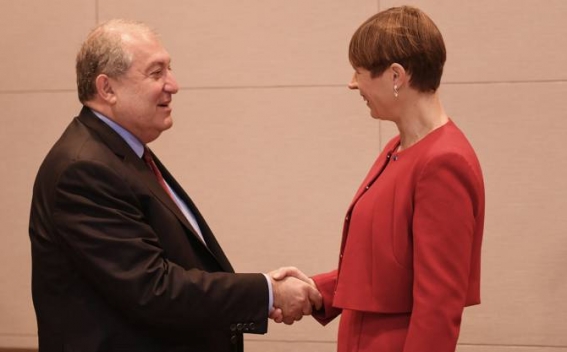 President Armen Sarkissian, who is in Japan on a working visit, today met with the President of the Republic of Estonia Kersti Kaljulaid.

The Presidents of the two countries spoke about the opportunities to expand the mutually beneficial cooperation and agreed that potential is rather big and the two countries can cooperate in a number of areas. President Sarkissian said that Armenia could be interested in the Estonia’s experience and expertise in different areas.

The interlocutors referred also to the Armenia-EU agenda, and to cooperation in the framework of Eastern Partnership in particular. Stressing the importance of the contacts between the peoples, President Sarkissian in this context highlighted the invigoration of works aimed at the facilitation of the visa regime with the EU countries.

The Presidents spoke also about cooperation between the presidential structures of the two countries, particularly, on the implementation of exchange programs. President Sarkissian noted that Armenia is implementing such programs already with other countries.

The President of Estonia inquired about the developments in the northern parts of Syria and on Armenian President’s position r the situation. President Sarkissian said that conditioned by the historical ties in the region of the Middle East region and presence there of the Armenian community, Armenia is watching closely the unfolding events and is trying to bring its contribution to the humanitarian initiatives. The President of Armenia expressed concern with the situation and said that the international community should take practical steps to make Turkey stop actions and protect the rights of the Syrian citizens, including those of the national minorities, along the border with Turkey.