Minsk Package of Measures has no Alternative for Ukraine Settlement, say Putin and Macron 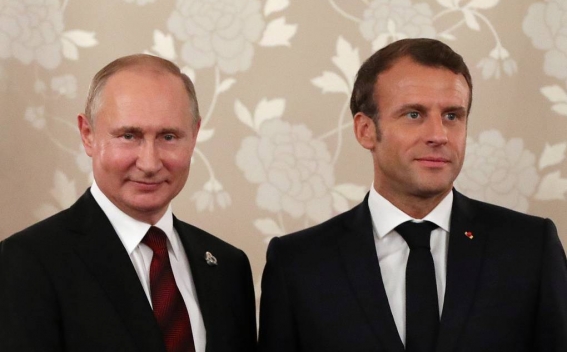 In a telephone conversation on Monday, the Russian and French presidents, Vladimir Putin and Emmanuel Macron, emphasized that the Minsk package of measures has no alternatives for the settlement of the Ukrainian crisis, TASS reports citing Kremlin press service.

"Kiev must unconditionally comply with all the agreements achieved in the Normandy Format and by the Contact Group. First of all, this concerns the disengagement of forces at two coordinated sections along the contact line at the settlements of Zolotoye and Petrovskoye, as well as enshrining the ‘Steinmeier Formula’ in the Ukrainian legislation," the press service said.

"Discussing the possibility of holding a next Normandy Four summit, the Russian president once again put an emphasis on the expediency of thorough preparations for it, which would make it possible to formulate new moves within the context of a full implementation of the Minsk agreements," it added.

The sides agreed that "leaders’ aides and the foreign ministries will continue respective work," the press service said.

The first talks of the Normandy Four group took place in France in June 2014 amid commemorations of the 70th anniversary of the landing of allied troops in Normandy. Then the leaders of Russia, Ukraine, France and Germany met for the first time to find a solution to the conflict in the southeast Ukrainian region of Donbass. Since then, the Normandy Four group has held a series of phone talks and summit meetings, along with meetings of foreign ministers and other officials. The latest Normandy Four summit was held in Berlin in October 2016.

In late 2015, then German Foreign Minister Frank-Walter Steinmeier put forward a plan that later became known as the "Steinmeier Formula." The plan stipulates that special status be granted to Donbass in accordance with the Minsk Agreements. In particular, the document envisages that Ukraine’s special law on local self-governance will take effect in certain areas of the Donetsk and Lugansk regions on a temporary basis on the day of local elections, becoming permanent after the Organization for Security and Cooperation in Europe (OSCE) issues a report on the vote’s results.