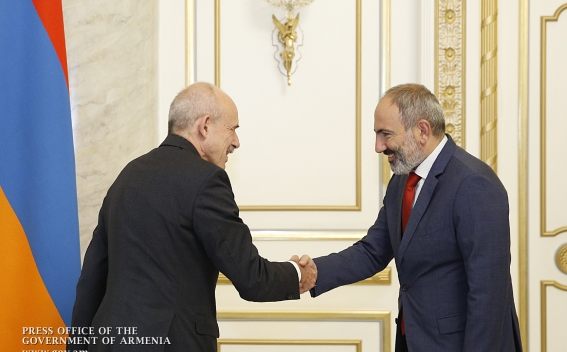 Congratulating the Ambassador on assuming office, the Prime Minister wished him fruitful tenure for the development and strengthening of Armenian-German relations. Nikol Pashinyan emphasized that Germany is an important political and economic partner for our country, and a good dynamic of bilateral cooperation has been recorded over the past 1.5 years. The Premier appreciated the German government’s support for the reforms underway in Armenia, including the development of democracy and the fight against corruption.

“Our goal is to bring Armenia to the highest standards of democracy and the fight against corruption,” he said. Nikol Pashinyan attached particular importance to close economic ties with Germany, close cooperation with KFW Bank and GIZ in terms of effective implementation of economic and social programs. The Prime Minister stressed the need to intensify the activities of the Armenian-German Intergovernmental Commission by tapping the potential inherent in bilateral economic cooperation.

Thankful for the warm welcome, Ambassador Banzhaf said relations between Armenia and Germany have been reinvigorated following the Velvet Revolution as the country is taking sustained steps to develop and strengthen democratic institutions.

“Your country is making great progress in the fight against corruption, and the German government will continue to help Armenia promote effective reforms,” he said. The Ambassador stressed that German tourists’ interest for Armenia has increased considerably over the past year due to the changes underway in the country.

The Prime Minister and the Ambassador discussed a number of issues related to the development of Armenian-German cooperation in the fields of energy, construction, industry, tourism, infrastructure development and in other fields. They exchanged views on the prospects of cooperation between Armenia and the European Union under the Eastern Partnership.