Nikol Pashinyan: “The Diplomatic Service should Give the World a Better Understanding of Our State and Nation” 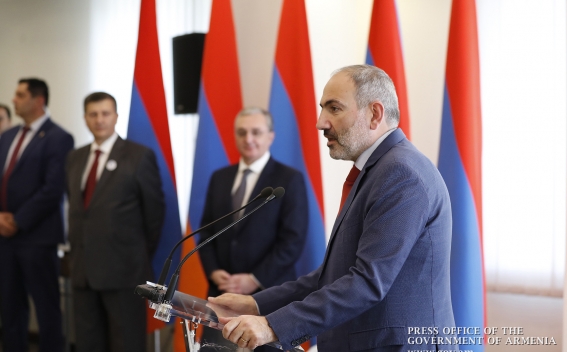 Prime Minister Nikol Pashinyan attended a gala event dedicated the 10th anniversary of the Diplomatic School of the Ministry of Foreign Affairs and the young diplomats’ oath-taking ceremony.

The Premier first visited the Diplomatic School to get acquainted with its decade-long activities. Addressing the event, Prime Minister Pashinyan congratulated those present on the Diplomatic School’s Anniversary. He noted that the meanings of old and new concepts are getting new nuances in the modern world and it is important to record from time to time what we should expect of our diplomatic service

“It turns out that by saying diplomacy we primarily understand foreign affairs, but now all state structures, including the city halls and municipalities have to deal with diplomacy because the scope of contacts has widened a lot around the world. We are past the time when only diplomats could see and get in touch with foreigners. What is the greatest mission of our diplomatic service under the new conditions? I believe that the diplomatic service should give the world a better understanding of our state and nation, and then we ourselves will understand the world better because this largely depends on how well we keep abreast with the global processes and developments, and also how well we manage challenges to fit them into our national interests,” the Premier said.

Nikol Pashinyan emphasized that it is crucial for diplomatic training to give graduates greater ability to understand the world, their country and people. The Head of Government pointed out that certificates and diplomas should not be perceived as an evidence of sufficient knowledge, but as an evidence of skills to better understand the rapidly evolving world mediating information and communication.

“In this respect, I feel this is just what we should take into account when we say that our state, country and people need to be competitive. We must be able to get a niche and protect, develop our identity in the modern world.

By saying development I mean that we can call successful only those stretches of our millennia-long history when we were part of the world. While dissatisfied with some global developments, but still being part of this world and sympathizing with others, we cannot but enhance our own competitiveness. This is why diplomacy, foreign policy, and the diplomatic service are supposed to play a crucial and leading role in our statehood-building effort. I wish you all the best in this mission.

I once again congratulate you on the Diplomatic School’s 10th anniversary. I am congratulating all graduates on embracing the career of diplomatic service or entering a new phase of knowledge acquisition,” Prime Minister Pashinyan said.