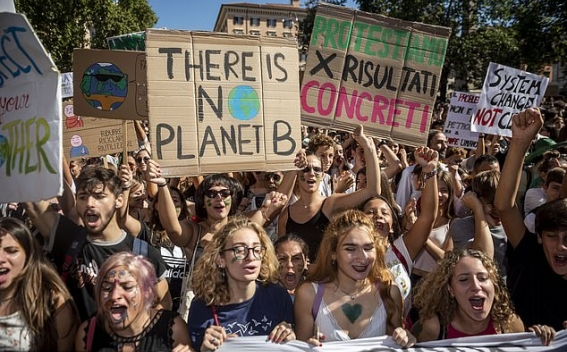 From next year, Italian school students in every grade will be required to study climate change and sustainability, in an attempt to position the country as a world leader in environmental education, CNN reports.

Education Minister Lorenzo Fioramonti, of the anti-establishment Five Star Movement, said all public schools will include about 33 hours a year in their curricula to study issues linked to climate change.
The lessons will be built into existing civics classes, which will have an "environmentalist footprint" from September 2020, Vincenzo Cramarossa, Fioramonti's spokesman, told CNN.
"The idea is that the citizens of the future need to be ready for the climate emergency," Cramarossa said.
In addition, sustainable development will appear in more traditional subjects, such as geography, maths and physics, Cramarossa said.
"There will be more attention to climate change when teaching those traditional subjects," he explained.
Fioramonti, an economics professor at South Africa's Pretoria University, told Reuters in an interview that the entire ministry "is being changed to make sustainability and climate the center of the education model.
"I want to make the Italian education system the first education system that puts the environment and society at the core of everything we learn in school," he said.
Cramarossa said a panel of scientific experts, including Jeffrey D. Sachs, director of Columbia University's Center for Sustainable Development, and American economic and social theorist Jeremy Rifkin, will help the ministry redevelop the national curriculum to pay more attention to climate change and sustainability.
"It's a world's first to have a (compulsory) national education in that sense," Cramarossa said.
The Five Star Movement, to which Fioramonti belongs, has a history of environmental concern and grassroots activism.
Since becoming minister, Fioramonti has been criticized by right-wing opposition parties for supporting striking students protesting climate change and backing taxes on plastic and sugary drinks.
Հայերեն На русском