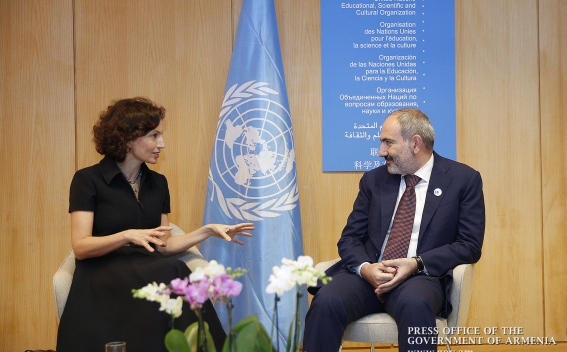 Nikol Pashinyan highlighted the ongoing cooperation between the Armenian government and UNESCO and reaffirmed our country’s support for humanitarian missions carried out by this organization in different parts of the world. Noting that Armenia is eager to expand the scope of interaction with UNESCO, the Premier hailed the Organization’s sustained focus on the preservation of cultural heritage in our region.

The Prime Minister emphasized that the Republic of Armenia is committed to promoting education as a powerful tool for training young generations in the spirit of peace, dialogue, human rights, tolerance and non-discrimination.

Nikol Pashinyan further said that his government fully supports the Yerevan State University’s proposal to establish a UNESCO Chair on Education and Genocide Prevention. He stressed that education is a powerful tool for preventing the crime of genocide.

Audrey Azoulay thanked Nikol Pashinyan for attending the 40th session of the UNESCO General Conference and praised Armenia’s efforts to preserve its rich cultural heritage. The UNESCO Director-General noted that her organization is interested in developing and expanding cooperation with Armenia in the aforementioned areas.

Views were exchanged on cooperation between UNESCO and Armenia, as well as on the Organization’s goals and objectives. The interlocutors specifically talked about the prospects of interaction in science, education and cultural heritage preservation.

Armenian Minister of Education, Science, Culture and Sport Araik Harutyunyan was in attendance.