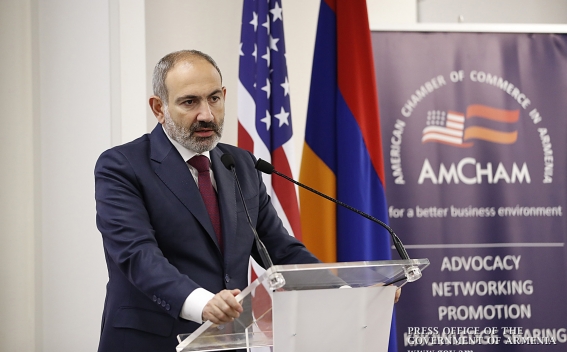 Prime Minister Nikol Pashinyan attended the year-end meeting of the American Chamber of Commerce in Armenia (ACCA), attended by U.S. Ambassador to Armenia Lynne Tracey, the ACCA Board of Directors with more than 100 members, as well as representatives from the Armenian government and international donor organizations.

In this regard, Nikol Pashinyan said the government is introducing a new toolkit in 2020, including the proposed amendments to the Tax Code, which in their most visible sections reflect the government’s perception of the future day of the Armenian economy and development vectors.

“The first is the introduction of a flat income tax, which has seen some criticism of ideological nature. I want to say that the proposed legislative amendment reflects our understanding of economic trends, and we want to stimulate those areas that may be described as high-wage industries. We know that the income tax will be substantially lowered for high salaries. Starting this January 1, a 23 percent flat income tax will be applied and the process will be continued. In the coming years we will have a 20 percent flat income tax. A certain reduction is also expected in the profit tax. And what matters most here is that we are exempting micro-businesses from taxes. This shows two main vectors of our efforts: First, we stimulate technological investments in the Republic of Armenia and increase the country’s attractiveness in this respect. In parallel, there is the well-known law on startups, the conditions of which we have improved. On the other hand, as a tool for overcoming poverty, micro-businesses are generally exempt of taxes because our perception remains that there is no other way out of poverty than work. Therefore, if we want to help our citizens overcome poverty, we must create new jobs,” Nikol Pashinyan said.

The Prime Minister reminded that the government is implementing specific programs in this direction, and the social policy is aimed at providing labor incentives. Nikol Pashinyan did not consider it unnecessary to refer to the draft law on the return of VAT arrears, which has already been approved and a relevant process is on its way. The government plans to repay 45-56 billion VAT arrears to businessmen.

“By the way, we are talking about overdue debt, but in the meantime, we have already doubled the rate of VAT return for the first 10 months of 2019 as compared to 2017. That is, against 54 billion drams settled as VAT returns in 2017, around 114 billion drams were returned in the first 10 months of this year. These are the sums that were removed from circulation unfairly or due to legal inconsistencies. And now we are sending that money back to the economy.

Of course, we have no repressive or administrative leverages to compel entities to invest in the Republic of Armenia. But we have made an appeal to those companies that have received VAT refunds, calling on them to reinvest that money in the Republic of Armenia. Indeed, some of them will respond to this call, and we will welcome such companies as our partners,” the Prime Minister said.

Referring to the current investment environment in Armenia, Nikol Pashinyan noted that he cannot say that the government has reached an ideal situation and added that we have well-known and latent issues in this area that are kept in government’s spotlight. In the Premier’s words, a key development factor from the institutional point of view or one of the biggest obstacles faced today is the lack of a developed securities market.

Speaking about foreign investments, the Prime Minister said we are facing some problems here and have developed specific criteria for assessing the situation. “There is a tool available to the international community engaged in economic activity. I mean the Eurobonds that had a record low interest rate for Armenia and a record high demand in Armenia. We are going to refinance the debt of USD 500 million, though the market demand is over 2 billion dollars. And here we will have to deal with one of the most important issues. I mean the capital expenditures. You know that capital spending in Armenia has always been accompanied by various institutional bottlenecks. Following the events of 2018, this problem was aggravated by another component: it is the fight against corruption, which has not allowed us to exercise or overstate our plans for capital expenditures,” the Premier said, noting that the government is sensitive on the matter of tenders and will do everything possible to prevent the bad traditions.

“What does this have to do with Eurobonds? We can see that the Republic of Armenia is capable of implementing mega projects as a serious boost for the economy. In this regard, we need to make balanced and accurate decisions on such mega projects in order to stimulate the economy in the best possible manner.

We can also see that we have the necessary potential to fund such projects, namely the issue of new Eurobonds. This should be discussed with regard to specific projects. Another piece of good news is that the government can attract funds on the internal market. Most importantly, the high economic mood available in Armenia instills hope that we will be able to step up the growth rates in 2020.

In this regard, I would like to state that the most authoritative international organizations have reassessed our country’s growth forecasts for the coming years, and they all have estimated the growth to be higher than before. Against this backdrop, we are left with the task of addressing issues of speed, efficiency, and effectiveness of legislative, regulatory, and government responses. We can state that the field on which the new economic relationship should be built is ready,” Nikol Pashinyan emphasized.

Taking the opportunity, the Prime Minister thanked all those ACCA-member entities that are generating added value in our country, paying taxes and promoting Armenia’s economic development.

“Our government had set the task of changing the image, the concept, and the perception of economic entities in Armenia. And I feel that we have tangible changes in this field as business people are gradually taking on a new image, especially in the context of increased state budget receipts. They are growing because the government is fighting against the shadow economy through specific tools to boost the economy. But above all, surplus revenue comes primarily because there are law-abiding companies, businesses and individuals who create added value.

It is crucial for the public at large to trace down this causal connection, that is, to see the businessman’s image change in our country, since no improvement will come without shaping a new attitude toward business. We are past the time when the economy was fuelled by the exploitation of human beings. Modern, well-developed companies are the ones that sometimes make disproportionate investments as part of their social responsibility,” Prime Minister Pashinyan said.