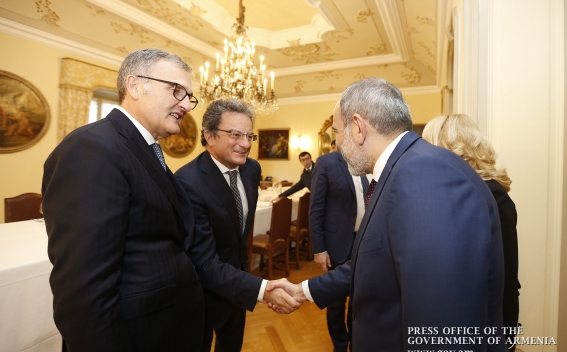 Prime Minister Nikol Pashinyan, who is paying an official visit to Italy, today met with representatives of the country’s business circles during a working lunch held in Milan.

Prospects for investment cooperation and joint programs between Armenia and Italy were discussed at the meeting. Speaking about the opportunities for doing business in Armenia, the Prime Minister touched upon the development dynamics in the fields of energy, tourism, information technology, etc.

Nikol Pashinyan said his government is implementing fundamental reforms in various areas, including the business environment: effective investment protection mechanisms are in place in Armenia to provide for attractive opportunities for businesses. In this context, highlighting the opportunities stemming from Armenia’s adherence to integration associations, he noted: “You can have a European-level business and enter a 200 million-strong market freely without having to pay any fees.”

Prime Minister Pashinyan answered the questions of interest to Italian business community representatives, which bore on Armenia’s relations with neighboring countries, the ongoing economic reforms and the EU-Armenia relations.

With reference to the prospects of cooperation with the EU, Prime Minister Pashinyan advised that Armenian producers benefit from the EU’s preferential GSP + trade regime, as well as from the GSP scheme in trade with the United States and a number of other countries.

Welcoming the reforms implemented by the Armenian government, the Italian businessmen said they wish to invest in Armenia. Agreement was reached to launch a discussion on specific joint projects.

The meeting was followed by an Armenian-Italian business forum, referred to as “Armenia, a new reality; platform on the Eurasian market,” co-hosted by the Embassy of the Republic of Armenia in Italy, the Italian Trade Agency, as well as Assolombarda and Mediobanca investment companies.