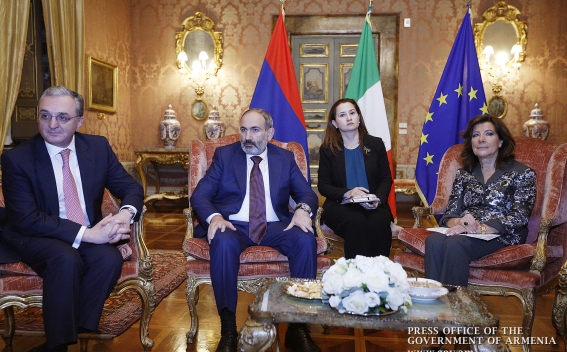 Prime Minister Nikol Pashinyan’s official visit to Italy continues. After attending the planned meetings and events in Milan, today the Prime Minister of Armenia arrived in Rome. The Premier’s first meeting in the capital of Italy was with Senate President Maria Elisabetta Casellati.

The President of the Italian Senate welcomed the Armenian Prime Minister’s visit to Italy, which she said would give new impetus to bilateral relations. Noting that Italy is closely following the reforms underway in Armenia, which are the key to developing democracy, Maria Elisabetta Casellati assured of her country’s readiness to help the Armenian government succeed in that process through exchange of experience. She stressed that this might propel continued and effective dialogue between Armenia and Italy both within the European Union and in the bilateral format. She advised that the Italian Senate has ratified the EU-Armenia Comprehensive and Enhanced Partnership Agreement (CEPA), which has already been submitted to the Chamber of Deputies for consideration.

The President of the Italian Senate expressed satisfaction with the dynamics of trade and economic relations between Armenia and Italy, in particular, the recent increase in exports by about 30%, and went on to note that Italy is keen to develop cooperation with Armenia in the fields of trade, infrastructure and culture.

Thankful for the reception, Nikol Pashinyan highlighted the ongoing high-level political dialogue between Armenia and Italy, which can eventually lead to the development of economic relations. Noting that this year has seen a fairly high growth in bilateral trade and Italian investments in Armenia, the head of the Armenian government expressed hope that this process would be catalyzed following his visit.

According to Prime Minister Pashinyan, Armenia is in the process of fundamental transformations: the country is pushing ahead along the path of democratization; a real fight against corruption is underway, which will change the economic situation.

The Premier pointed out that the EU is a key partner of Armenia on its reform agenda, and thanked the Italian Senate for ratifying the CEPA and sending it to the Chamber of Deputies. Nikol Pashinyan said Armenia highly appreciates the April 10, 2019 initiative of the Italian Chamber of Deputies to pass a resolution recognizing the Armenian Genocide.

Touching on the settlement of the Nagorno-Karabakh conflict, Prime Minister Pashinyan stressed that Armenia is strongly committed to achieving an exclusively peaceful settlement. The Italian Senate Speaker noted that Italy welcomes the resolution of the conflict through dialogue and peaceful efforts.