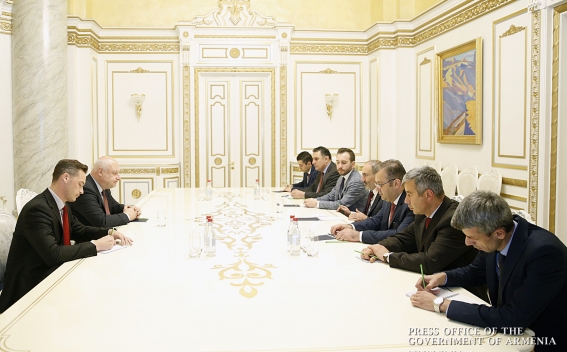 The Prime Minister noted that OSCE is an important partner for Armenia not only in terms of bilateral cooperation, but also because the Minsk Group Co-Chairs’ format, which has an international mandate to deal with the Nagorno-Karabakh conflict, is part of OSCE. Nikol Pashinyan highlighted the cooperation with the OSCE Parliamentary Assembly, noting that it is a good platform for fostering dialogue. Hopeful that OSCE will pursue its consistent efforts in a bid to settle the regional conflicts and build an atmosphere of trust, the Premier presented the Armenian Government’s position and approaches to the Nagorno-Karabakh issue.

George Tsereteli hailed Armenian parliamentarians’ active participation in the OSCE PA proceedings. He welcomed the reforms underway in Armenia, which cover the judiciary, electoral processes, human rights protection, freedom of speech, etc. With reference to the Nagorno-Karabakh conflict, the President of the OSCE Parliamentary Assembly reaffirmed his organization’s position, which consists in reaching a peaceful settlement. In this context, he stressed the need for building an atmosphere conducive to peace.

Taking the opportunity, the interlocutors exchanged views on other international and regional issues.