Trump, Macron Hold Tense Meeting: 'Would You Like Some Nice ISIS Fighters?' 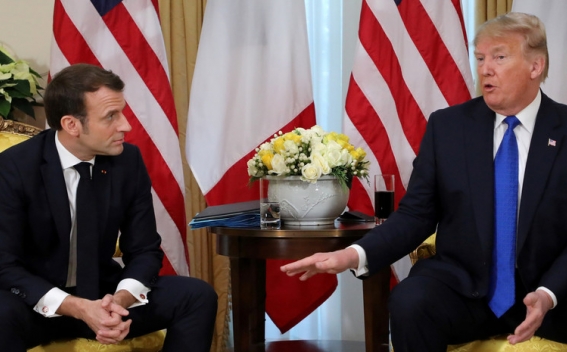 President Trump and French President Emmanuel Macron held a tense meeting Tuesday on the sidelines of a NATO summit, with Trump at one point telling the French leader he could send him some "ISIS fighters" if he wanted them, The Hill reports.

“Would you like some nice ISIS fighters? I can give them to you,” Trump said with a slight smile at the meeting, which was carried live on cable news. “You can take every one you want.”

“Let’s be serious,” Macron replied sternly, reasoning that most ISIS fighters came from Syria, Iraq and Iran and disputing Trump’s common refrain that the terrorist group had been defeated.

Trump has complained that European countries have been unwilling to accept ISIS fighters the U.S. had captured.

The French president insisted that the number of European ISIS fighters was a “tiny” part of the overall problem of addressing destabilization in the region. He was also adamant that the terrorist group had not entirely been defeated, a break with a common declaration from Trump.