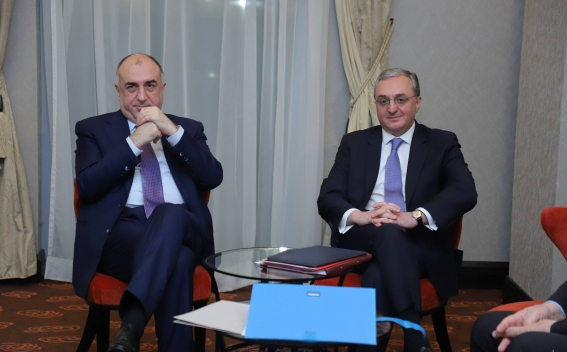 The meeting of foreign minister of Armenia Zohrab Mnatsakanyan and foreign minister of Azerbaijan Elmar Mammadyarov was held in Bratislava on December 4 on the sidelines of the 26th OSCE ministerial conference. The meeting was held under the mediation and with the participation of the OSCE Minsk Group Co-Chairs Igor Popov of the Russian Federation, Stéphane Visconti of France, and Andrew Schofer of the United States of America, as well as Andrzej Kasprzyk, the Personal Representative of the OSCE Chairperson-in-Office, the Armenian MFA told Armenpress.

During the meeting the actions aimed at strengthening the ceasefire, trust, continuing the joint works in early 2020 were discussed.

The Armenian FM highlighted the modest result achieved within the frames of the agreements on preparing populations to peace through the recent exchange program of reporters from Armenia, Artsakh and Azerbaijan. The possibility to continue such direct engagements between the journalists, societies was considered in this context. At the same the meeting participants highlighted the importance of taking other measures to strengthen trust.

Commenting on his recent meeting with the foreign minister of Artsakh in Yerevan, the Armenian FM once again emphasized the necessity of direct involvement of the Artsakh authorities, especially on content-related matters of the settlement.