We are Aimed at Solving Very Tangible and Concrete Problems: Nikol Pashinyan 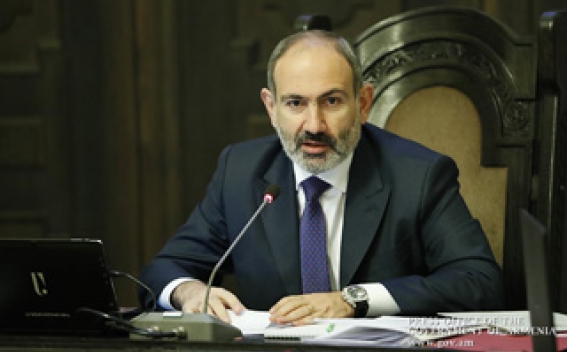 At the beginning of the government meeting, Prime Minister Nikol Pashinyan made introductory remarks, in which he stated: “Dear colleagues, I would like to touch upon one issue before moving on to the agenda of today’s meeting. The problem is that our government is faced with a number of so-called socio-psychological or civilizational problems that I would like to voice here today. We are aimed at solving very tangible and concrete problems in the Republic of Armenia, and we have already succeeded. What is the problem we face? When we solve the problem of one group, one entity, one settlement, there appears another group, a settlement, another entity to say: “Why did you address their problem and mot ours?” This is actually a civilizational and socio-psychological problem, and sometimes it seems that we had better do nothing at all, so that having put up with the despair, everybody would continue to live as they did before.

In general, this is a serious problem, because it seems that the long-standing problems, accumulated in the country for 30 years, or 5 years, for one year, it does not matter, cannot be solved on the go; should we try to solve all problems with one action, most likely, with a 100 percent probability, we will lead our country to collapse and failure.

Why do I call this a civilizational problem? Because when I think about what underlies this phenomenon, I come to the conclusion that people in Armenia were not inclined to observe a primitive civilizational mechanism, namely to stand in line. When something happened somewhere, a service was provided, everybody tried to go and catch the person providing the service as soon as possible, so that he or she would be served first. This is indeed a very serious civilization problem, and I am glad that electronic queue machines have been introduced in the Republic of Armenia, particularly in the banking and customs systems. I would like to say that we, in fact, in all the places where there is such a problem, should make the installation and operation of such devices mandatory.

Another civilizational problem is that a construction site in the Republic of Armenia means garbage spread everywhere. I can not understand this, and by the way, Mr. Vermishyan, a few months ago I gave you an assignment on this issue, and I do not understand why the relevant inspectorate has failed to apply fines and sanctions against faulty developers. This phenomenon is widespread in the Republic of Armenia, and construction is turning into the spread of garbage over the widest possible radius.

I do not either understand if repair work is underway in the government building, why should we all walk along the trash, starting from the government building and ending in the most remote places. Let us see if the garbage surrounds construction sites around the world or not. The builder must first clean up the rubbish around him every day - at the start of work and at the end of work. In this regard, the Urban Development Inspectorate has a very specific job, because I am not very well aware, but I do not think that according to the norms applicable in the Republic of Armenia it is considered normal to have a lot of garbage where construction is going on. Not to mention the topic I touched upon during my visit to Kotayk Marz, I do not understand why working on a construction site means working in old homely clothes.

These people should have a uniform, this is the same as if we came to a government meeting in our old home clothes, would come in rags to a government meeting. Is this not a concrete attitude towards work, people and the environment? Construction companies earn millions. Is it difficult to allocate some money from these millions to buy the cheapest uniform for workers? And why does the Inspectorate for Urban Planning not carry out specific work in this direction?

I think that these are serious psychological and political problems, because we have information, for example, that our dear compatriots from Artsvashen are going to hold a protest action again in front of the government building. De jure it was recorded that all these people signed the papers that the state has fulfilled all its obligations to them, and these papers are notarized. Well, we understand that perhaps they had been made to sign the document, but why is this phenomenon happening again? There is a simple reason: we provided 1.2 billion drams for refugees, but the refugees did not even get the amount. The same was with the situation in Amulsar. We asked people why they had failed to raise this issue for during the past five years. We were told that the authorities were too tough, and that the demonstrators would have been arrested or persecuted. That is, what happens? You want to say that in the Republic of Armenia normal relations can be established only with the help of brute force, this is our expectation, this is what we want?

I say that if we were to solve the issues based on bribes, corruption, our narrow political or personal interests, some special attitude towards our cousins or something like that, it would all be understandable. But I am saying that this form of relations is absolutely unacceptable, because it is an attempt to return Armenia to a completely different logic in the civilized sense. We are not afraid of dealing with problems. Nevertheless,, it appears that when we solve a problem or a problem of a group, an unfriendly neighbor may come and say why you are not solving our problem. Stand in line, dear people, we will solve all problems, discuss all issues, but let us first get out of the logic of solving problems with the help of rudeness, because this is a way to nowhere.

Now the same problems will arise in connection with the disaster area. Yes, we clearly say that at present the de jure obligation of the state is fixed in relation to 453 citizens of the Republic of Armenia. There is no other person in the Republic of Armenia who has a document certifying the state’s commitment to it. Very well, we understand that there may be technical problems, there may be other problems, we say that we will review the matter, but I say once again that when we solve the problems of those 453 beneficiaries, and it will be complete by the end of 2020, I predict that there will be some people here, who will tell us why you solved their problem, and not ours.

There is such an anecdote when one says that to make his bad mood complete all he needed was to see a neighbor win a car in the Lottery. Now this logic has become a well-established rule in public relations in Armenia. We can no longer go that way, it is unacceptable. Enough, there is a limit to everything. How long can this go on?”