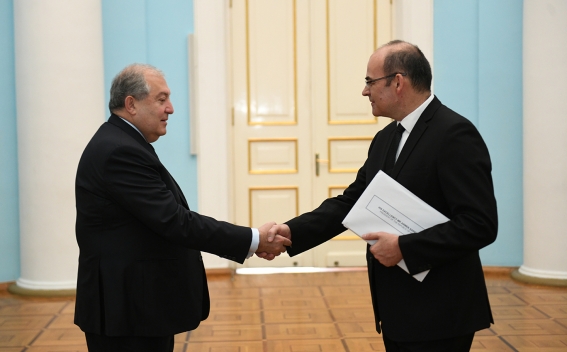 Today, the newly appointed Ambassador of the South African Republic to the Republic of Armenia Andre Johannes Groenewald (residence in Kiev) presented his credentials to the President of Armenia.

President Sarkissian congratulated the Ambassador on his appointment, wished him success and expressed hope that he would bring his contribution to the development of the bilateral relations.

“Our purpose is not only to improve relations but also to bring our nations closer,” the President underscored. “I would be glad to host President of South Africa Cyril Ramaphosa in Armenia for him to discover our country which used to be the crossroad of ancient civilizations and now is a gateway to the EAEU.”

Ambassador Andre Johannes Groenewald noted that this was his first visit to Armenia and he was impressed with our country and people. “It is very different and special. I see multiple opportunities of cooperation between our countries,” he said.

The Ambassador expressed confidence that the presenting of the credentials would open new opportunities to make relations between the two countries and two peoples closer.

The parties discussed the promising areas of cooperation and noted that the two countries were well known for a high-quality diamond processing industry and could successfully cooperate in this area. They also referred to a possible cooperation in the areas of modern technologies, science and education as well as in the framework of the ATOM Presidential initiative which is aimed at the development of these areas.