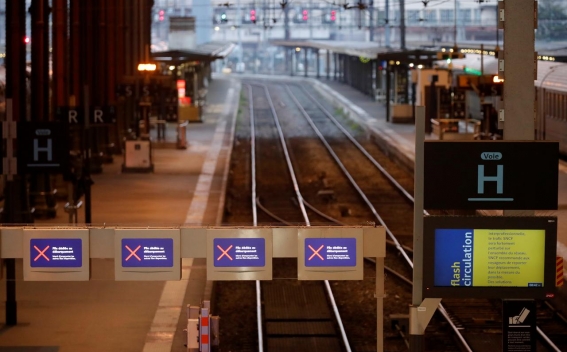 France faced a second day of travel chaos and understaffed schools and hospitals on Friday as unions said there would be no let-up in a strike against Emmanuel Macron’s pension reforms until the president backed down, Reuters reports.

Much of France ground to a halt on Thursday as transport workers went on strike - joined by teachers, doctors, police, firemen and civil servants. Smoke and tear gas swirled through the streets of Paris and Nantes as protests turned violent.

The strike pits Macron, a 41-year-old former investment banker who took office in 2017 on a promise of opening up France’s highly regulated economy, against powerful unions who say he is set on dismantling worker protections.

There were cancellations of rush-hour trains into Paris on Friday and 10 out of 16 metro lines were closed while others ran limited services. As commuters took to their cars, traffic jams totaling 350 km clogged the roads in and around the capital, according to traffic app Styadin.

Rail workers extended their strike through Friday, while unions at the Paris bus and metro operator RATP said their walkout would continue until Monday.

“We’re going to protest for a week at least, and at the end of that week it’s the government that’s going to back down,” said 50-year-old Paris transport employee Patrick Dos Santos.

The main trade unions were to meet on Friday morning to decide the next course of action.

The outcome depends on who blinks first - the unions who risk losing public support if the disruption goes on for too long, or the president whose two-and-a-half years in office have been rocked by waves of social unrest.