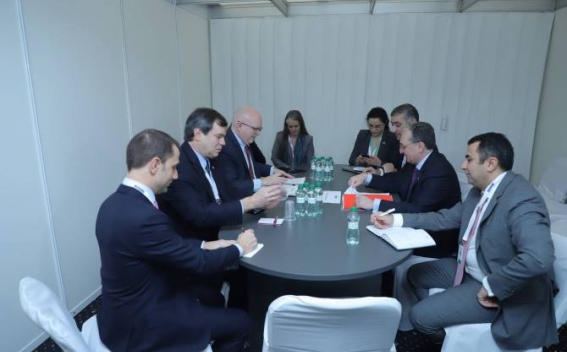 Armenian Minister of Foreign Affairs Zohrab Mnatsakanyan had a meeting on December 6 with Acting Assistant Secretary of European and Eurasian Affairs of the US State Department Philip T. Reeker in Slovakia during the OSCE 26th ministerial.

Mnatsakanyan and Reeker discussed the Armenian-American bilateral cooperation agenda and exchanged ideas over the process of implementation of the agreements reached as part of the Armenia-US Strategic Dialogue and upcoming steps, the foreign ministry said in a news release.In the context of the ongoing reforms in Armenia, FM Mnatsakanyan highly appreciated the US continuous support to a number of programs and initiatives.

The sides also discussed the agenda items of the OSCE Ministerial Conference, as well as several issues of the international and regional agenda.

Mnatsakanyan and Reeker exchanged ideas over the recent OSCE MG-mediated meeting between the Armenian and Azerbaijani FMs and the statement issued by the OSCE MG heads of delegations. “In this context the interlocutors attached importance to the development of an atmosphere conducive to peace through maintaining and strengthening the ceasefire, as well as the implementation of the agreements reached over preparing the populations to peace”, the ministry said.