French Demonstrators Vow to Continue Strikes over the Christmas Period 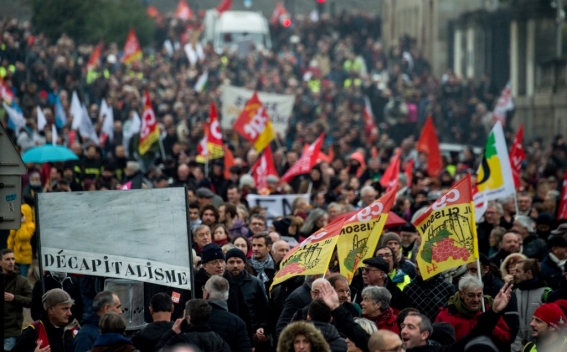 Protests against changes of France’s pension system are continuing. Thousands of people have slowed the country. Transport communication has been paralyzed. Railway and public transport workers, employees of airport,medical institutions, educational institutions and other public and private sectors have gone on strike.  Because of this nationwide strike a 391 mile long traffic jam has been triggered on the outskirts of Paris.

France is bracing itself for a widespread strike starting from December 5. This looks set to be the most comprehensive strike the country has experienced in decades. A strike of this scale took place in 1995, when the entire country was immobilized.

The reason is French President Emmanuel Macron’s new pension plan. He wants to simplify the complex French retirement system by merging 42 different regimes into one single regime, thus ending special privileges for some workers. The current program allowed a significant part of the population of France to quit their jobs earlier, receiving significantly higher pensions, which according to Macron is an additional burden for the country.

This new system will introduce a ‘points system’ for retirement. Currently, public sector worker’s pensions are at present calculated on the salary they earned for the last six months of working life – normally the highest for most people – and an assessment of the best 25 years of their career. The new system will take every year into account. This means that if you had a couple of lean years or became self-employed for a while, you will receive a lower pension.

As French Prime Minister Edouard Philippe stated on December 11, the main reason for the reforms is that the current pension system will experience a deficit ranging from €7.9 to €17.2 billion by 2025, BBC reports.

Under the pressures on the government by demonstrators, Macron’s administration has recently made some concessions, but the overall essence of reforms remained the same. The new plan also envisaged to raise also the retirement age. The age when French citizens (both the men and women) could receive a full pension was intended to put to 64 from 62 now.

But amid protests, a new retirement plan was introduced, according to which the legal retirement age in France will remain 62, but workers will need to work until 64 to get a full pension. In other words the French government will encourage people to work longer and will guarantee a minimum pension of €1,000 a month” for those who have worked a full career.

Besides some of the concessions agreed to by the government, including that the overhaul would not apply to those born before 1975 (as opposed to 1963, as had been previously stated), france24.com reports.

But this fact did not satisfy those living in France. The protestors said they were not satisfied with the concessions and pledged to continue the strike.   They have warned of ongoing, indefinite action in the run-up to Christmas.