Commemoration of the Apostles St. Peter and St. Paul 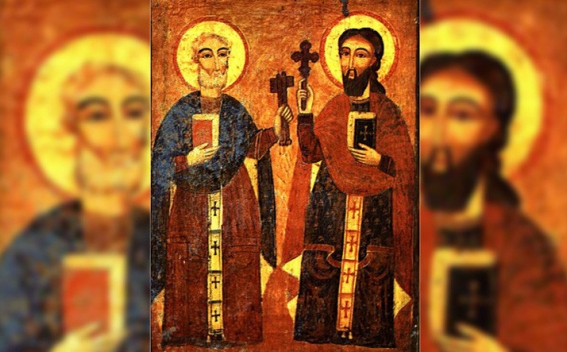 St. Peter was one of the 12 apostles of Christ. He was the brother of Andrew. He was one of the beloved apostles of Jesus and the witness of Our Lord’s transfiguration and the other important events related to Jesus. Peter was a fisherman. His name given during the circumcision was Shmavon, or Simon (in Greek). About this apostle for the first time was written in the Gospel according to John, “So you are Simon the son of John? You shall be called Cephas” (which means Peter) (Jn 1:42). Peter was born in the village Bethsaida and later was moved to the town Capernaum where Jesus healed Peter’s mother-in-law. Peter is more famous from the part of the Gospel when he said that Christ was the Son of the living God. And Jesus stated that being the Savior of the world and the Son of God He would build His Church (See Mt 16:15-19), Qahana.am informs.

During the night when Jesus was arrested Peter denied Jesus thrice and later deeply regretted for his deed. After the Pentecost it was Peter that explained to the people assembled what had happened and spoke about Incarnated Jesus. One of the important deeds of Peter was bringing the heathens to the church. Peter was arrested by the King Herod but escaped the prison by a miracle.

According to the tradition Peter was martyred in Rome and was crucified head-down. Two letters from Peter have been preserved.

St. Paul is the thirteenth Apostle of Our Lord Jesus Christ. He was born in the town Tarsus of Cilicia in the beginning of the first century. His parents were citizens of Rome who according to Heronimus had came from Galilee. First he studied in his native town and then he continued his education in Jerusalem, where his teacher was Gamaliel. Paul was a tent-maker by trade and this circumstance often helped him during the trips, when he earned his living by means of making tents. According to his own words Paul had been a Pharisee, had strictly obeyed the law and persecuted the Christians. However, on his way to Damascus Jesus appeared to Paul, after which Apostle Paul (whose name was initially Saul) became one of the greatest preachers of Christ’s commandments. He was baptized by the apostle Ananias. He has made several trips and preached the word of God. Fourteen letters from Paul have been preserved.

According to the tradition Paul was beheaded in 67 AD in Rome.