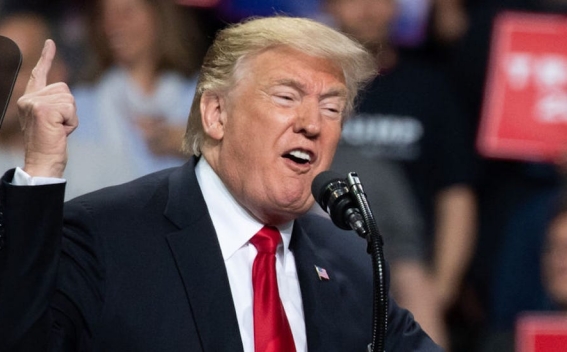 President Donald Trump threatened Sunday to slap sanctions on Iraq after its parliament passed a resolution calling for the government to expel foreign troops from the country, CNBC reports.

Tensions in the Middle East spiraled last week after Trump called for a U.S. airstrike in Baghdad that killed a top Iranian general, Qasem Soleimani.

Speaking to reporters on Air Force One, the U.S. president said: “If they do ask us to leave, if we don’t do it in a very friendly basis, we will charge them sanctions like they’ve never seen before ever. It’ll make Iranian sanctions look somewhat tame.”

“We have a very extraordinarily expensive air base that’s there. It cost billions of dollars to build. Long before my time. We’re not leaving unless they pay us back for it,” Trump said.

Soleimani, the head of a special forces unit in the Islamic Revolutionary Guard Corps, was the key architect of Iran’s military operations overseas.

He was killed late Thursday while leaving Baghdad airport, when his convoy was struck by a drone, ordered by the U.S. president. One of those killed with him was a key Iraqi militia leader, Abu Mahdi al-Muhandis, who was the deputy commander of Iran-backed militias known as the Popular Mobilization Forces.

The Iraqi government has accused Washington of violating its sovereignty.

“The Iraqi government must work to end the presence of any foreign troops on Iraqi soil and prohibit them from using its land, airspace or water for any reason,” read the resolution passed by the Iraqi parliament, which convened in an extraordinary session on Sunday.

The U.S. ambassador to Iraq is set to meet a Iraqi Prime Minister Adel Abdul Mahdi on Monday to talk about the future of American military troops in Iraq, two U.S. officials familiar with the matter told NBC News. They said the U.S. was expecting Mahdi to inform the ambassador of its decision to expel U.S. troops in Iraq.