Protests Pile Pressure on Iran After Admission of Plane Strike 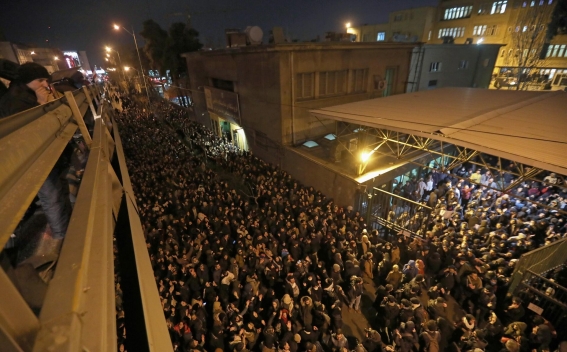 Iranian protesters and newspapers piled pressure on the country’s leadership and riot police stepped up their presence in Tehran on Sunday after Iran’s military admitted that it had mistakenly shot down a Ukrainian airliner, Reuters reports.

Riot police fired teargas at thousands of Iranians who had taken to the streets late on Saturday in the capital and other cities, many chanting "Death to the dictator", directing their anger at Iran’s top authority, Supreme Leader Ali Khamenei.

Reports of the protests were carried by state-affiliated news agencies, while video clips circulated on social media.

Tehran residents told Reuters that police had stepped up their presence in the capital on Sunday morning.

"Apologize and resign," Iran’s moderate Etemad daily wrote in a banner headline on Sunday, saying the "people’s demand" was for those responsible for mishandling the plane crisis to quit.

All 176 people aboard the flight, many of them Iranians with dual citizenship, were killed.

Protests erupted after Saturday’s admission that the military accidentally shot down the Ukraine International Airlines plane minutes after take off on Wednesday, when Iranian forces were alert for U.S. reprisals after tit-for-tat strikes.

For days, Iranian officials had vigorously denied it was to blame, even as Canada, which had 57 citizens on the flight, and the United States said their intelligence indicated an Iranian missile was to blame, albeit probably fired in error.