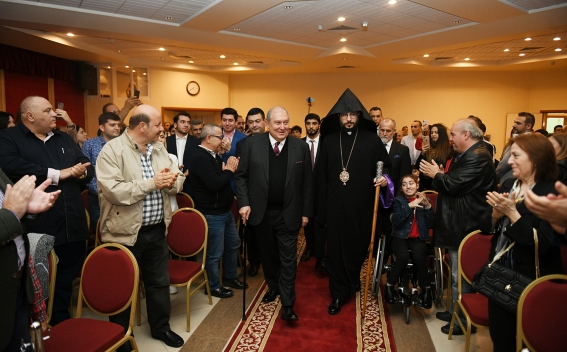 President Armen Sarkissian, who is in the United Arab Emirates on a working visit, was today at the Saint Gregori the Illuminator Church in Sharjah.

After the prayer of thanksgiving, Armen Sarkissian laid flowers in the backyard of the Church at the memorial installed on the occasion of the 100th anniversary of the Armenian Genocide and paid tribute to the memory of innocent victims.

At the hall of the Ohanessean Armenian School, President Sarkissian was present at a small concert performed by the students of the School. Later, he met with representatives of the community.

“I am one of you, and you all are part of Armenia. These are not the words of gratitude or appreciation. This is the truth,” President noted in his remarks. “Armenia is not only our buildings, history, land, mountains, and churches. Armenia is all of us, together. You are part of Armenia, regardless of whether you have a passport of the citizen of the Republic of Armenia, or not. I am confident that any Armenian child, regardless of where he or she was born, being born in the Armenian family together with being born in the family is also being born in Armenia. It means that it is not mandatory to be born in Armenia to have Armenia in oneself.

I dream of a day when all Armenians come back to the Fatherland but I want to believe that each of you has already come back to Armenia. You have come back because you have Armenian passports, in Armenia you have relatives, you love Yerevan, and are ready to serve the Fatherland. You have come back because in the times of need, you are ready to sacrifice a lot of things in the name of the Fatherland, because you are ready to work and make it powerful and strong. Only a powerful, strong, and resilient Fatherland will unite us, make us strong and confident. Regardless of where you live – US, Argentine, Lebanon, Russia or elsewhere, if Armenia is powerful and stable, we all know that we have a home where we can return in times of need.”

Noting that in the 21st century the world is changing rapidly, President Sarkissian said that the nations, which have certain qualities, which have preserved their national culture, identity, church, faith, language, and are tied to their native land can be successful. “Today, Armenia is strong also because of you. You can link Armenia with the world,” President Sarkissian told our compatriots. “Those nations, which have opportunities to develop new technologies and be stable and confident in the rapidly changing world, will be able to achieve success. I assure you that it will be exactly that way because it is no accident that we had been going through hardship and suffering for centuries, went through the immense calamity of the Genocide and became a nation which is able to survive and revive. We are a victorious nation and each of us should be proud of it and keep the victorious spirit within. I have no doubts about our future; I am confident that the 21st century will be our century.”

Speaking of his visits to the UAE, President Sarkissian said that in the last year the relations between the two countries registered considerable success both in making the relations closer as well as in the implementation of different programs.