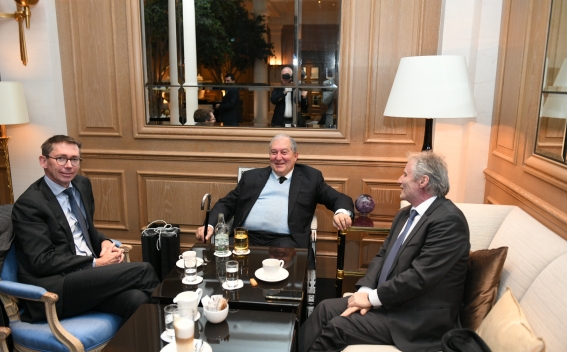 President Armen Sarkissian, who is in the Swiss Confederation on a working visit, in Zurich met with Hervé Dammann, Senior Vice President on International Development for Latin America and Eurasia of a leading technological French Thales Group of former Vice President of the company Rafael Ashkenazi.

The interlocutors continued discussions on the agreements reached with the leadership of the company during previous meetings and on possible areas of cooperation.

They spoke about interaction in the area of modern technologies, particularly, in the area of artificial intelligence, management of digital data, and implementation of joint programs in a number of different areas.

Underscoring once again their readiness for cooperation in the framework of the ATOM (Advanced Tomorrow) Presidential initiative, which is aimed at the development in Armenia of modern technologies and science, the representatives of the company said that Armenia possesses high-quality human capital, good educational and technological base which is very important for a company like Thales and creates a strong foundation for an efficient cooperation.