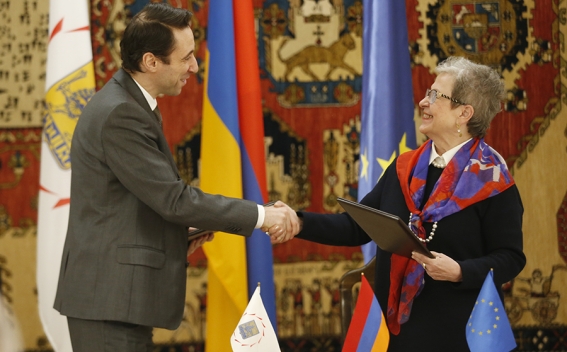 Yerevan Mayor and the Head of EU Delegation to Armenia, Ambassador Ms Andrea Wiktorin signed a Memorandum of Understanding.
Vassilis Maragos, Head of Unit of Armenia, Azerbaijan, Belarus and Eastern Partnership of the Directorate-General for Neighbourhood and Enlargement Negotiations of the European Commission and other top officials were present at the official ceremony.
The N(NEAR-TS/2019/412-943) grant agreement "On Cooperation between Yerevan, Warsaw and Tirana on Common Challenges in Hazardous Waste Management" was signed between Yerevan Municipality and the European Union on December 17,2019. The goal of the agreement is to install a new and effective system of hazardous waste management through systematic reforms in city administration. It will make it possible to strengthen the new and up-to-date institutional and professional capacities in hazardous waste management, the process of integrating thereof into respective structural areas, as well as the development of relevant procedures and integration into relevant city structures. Total budget of the programme is 5.326.377 euro. At the completion of the program it is expected that there will be ultimate solutions for all possible hazardous wastes in Yerevan including either neutralization or safe storage of wastes.

In his speech at the ceremony of signing the agreement Yerevan Mayor Hayk Marutyan stressed that Yerevan applied for the competition for participating in the program and won it which means that the current policy in hazardous waste management adopted by the RA capital city is in accordance with the EU principles.
"Yerevan has lots of omissions in hazardous waste management, actually the community has never paid serious attention to this problem. We have a lot to be done to solve the complex problems of this field. In 2019 we managed to create within a short time and put into full operation "The Organization for Waster Removal and Sanitary Cleaning in Yerevan". In January of this year we formed "Landscaping and Environment Management in Yerevan" organization. We are taking steps to have separated waste removal management", said Mayor Hayk Marutyan.
The Mayor also noted that Yerevan had made all possible preparations taking into account the liabilities provided by hazardous waste management program which allows to start the implementation of the program from an effective beginning.
All mentioned-above results will be achieved in parallel due to the cooperation wit Tirana and Warsaw, as it is envisaged in the programme.
***
Before the ceremony of signing Hayk Marutyan received the Head of Unit of Armenia, Azerbaijan, Belarus and Eastern Partnership of the Directorate-General for Neighbourhood and Enlargement Negotiations of the European Commission Vassilis Maragos. The parties attached importance to the cooperation of the RA capital city with the EU organizations in the fields of environment, urban development and areas of social significance. In particular, Hayk Marutyan noted that one of the challenges Yerevan faces today is public transport improvement which amidst with other problems contain environmental and social components. Hayk Marutyan noted that Yerevan is going to have "green" transport, and in this issue the city expects support of international partners including the European Union and its organizations.
Mr Vassilis Maragos noted that EU organizations are ready to show support in the creation of safe and convenient environment for the population of partner countries and therefore is willing to discuss the terms of cooperation in a number of fields.