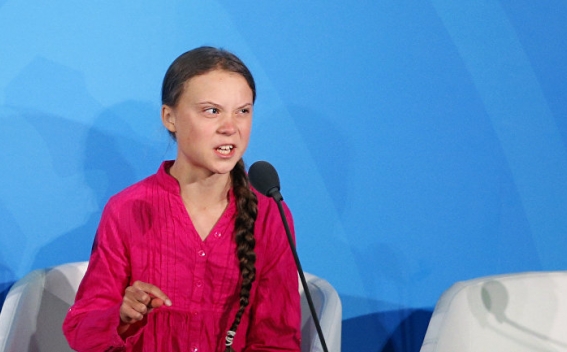 President Trump on Tuesday said he didn’t know anything about Swedish climate activist Greta Thunberg but called her “very angry” in an interview with The Wall Street Journal, The Hill reports.

“I don’t really know anything about her,” Trump said of Thunberg when asked about her on the sidelines of the World Economic Forum in Davos, Switzerland. The president then called her “very angry.”

Trump accused Thunberg, a 17-year-old activist who also spoke at Davos, of having an “anger management problem” after she was honored with Time’s “Person of the Year” award in December.

Trump’s December remarks about Thunberg, who has been diagnosed with Asperger's syndrome, prompted backlash from Democratic political figures.

Trump also previously seemed to mock Thunberg over her address at the United Nations climate summit in September during which the activist grew visibly angry as she demanded world leaders do more to tackle climate change.

Earlier Tuesday, Thunberg told the gathering of business and political leaders that they are not doing enough to combat climate change and urged them to treat it as a “real crisis.”

“We need to start listening to the science, and treat this crisis with the importance it deserves,” Thunberg told the crowd.

In his own remarks to an audience that included Thunberg, Trump took a veiled swipe at environmental “prophets of doom” and “alarmists,” while announcing that the United States would join the One Trillion Trees Initiative.

“We're committed to conserving the majesty of God’s creation and the natural beauty of our world,” Trump said.

The Trump administration has drawn scrutiny from environmentalists over its policies. Trump has been criticized for withdrawing the U.S. from the Paris climate accord and for rolling back various environmental regulations.

Trump is slated to attend various meetings in Davos on Tuesday and Wednesday before returning to Washington, D.C.