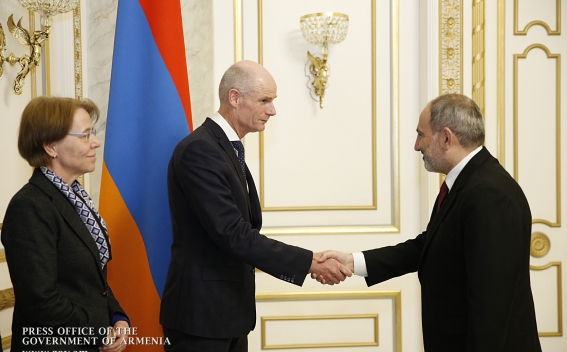 Prime Minister Nikol Pashinyan received a delegations led by Foreign Minister of the Kingdom of the Netherlands Stef Blok who is in Armenia on official visit.

Welcoming Stef Blok to Armenia, Nikol Pashinyan expressed confidence that his visit may impart fresh impetus to the development and expansion of relations between our two countries. Stressing the importance of high-level visits, the Prime Minister advised that he is due to pay an official visit to the Netherlands later this year, which will be the first visit paid to the Netherlands by an Armenian leader ever since the establishment of diplomatic relations between the two countries. The Premier said the Government of Armenia is keen to expand the bilateral cooperation in the political, economic and humanitarian spheres.

The Premier next touched upon the development of democracy in Armenia, the fight against corruption and the ongoing judiciary reform, emphasizing that the Government of Armenia has set itself an ambitious agenda and is taking consistent steps to implement it. Nikol Pashinyan welcomed the ratification of the EU-Armenia Comprehensive and Enhanced Partnership Agreement by the parliament of the Netherlands, which he described as a crucial milestone on the way to expanding the scope of interaction with European partners.

Thankful for the warm reception, Stef Blok pointed out that the impact of democratic developments and reforms are obvious in our country and went on to assure of the Dutch government’s readiness to cooperate in this field. The Foreign Minister said there are opportunities for economic cooperation, particularly in agriculture, information technologies and humanitarian affairs. Stef Blok expressed confidence that Nikol Pashinyan’s scheduled visit to the Netherlands would promote the bilateral agenda.

Taking the opportunity, the parties exchanged views on the Nagorno-Karabakh conflict settlement process and other regional issues.