Nikol Pashinyan: “The Most Important Goal of the Ongoing Police Reform is to Forge New Police-Citizen Relationship” 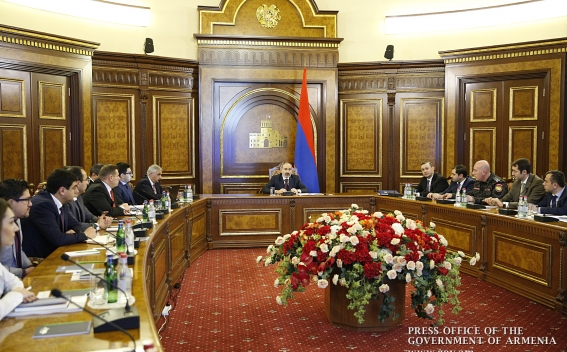 Prime Minister Nikol Pashinyan held a consultative meeting to discuss the agenda and the concept of reforms in Armenia’s police force.

Opening the meeting, Prime Minister Pashinyan said: “In general, the police reform has been on our agenda since the first day of our government, and this is one of the most important issues at the moment. It should be noted that ever since the 2018 non-violent velvet popular revolution in Armenia, the police has lived up to the tasks set before them, but we all understand that in the context of new political and social realities, we need a new police in terms of content. In general, the most important goal of the ongoing police reform is to forge new police-citizen relationship.

We have held various discussions, examined different models. Our conclusion is that we should refrain from taking rapid steps, and our actions should be of strategic relevance. Based on the results of 2019, we can state that the so-called post-revolutionary transition period is over, and we have already entered the stage of strategic management. I think that we should no longer implement isolated changes in any sphere, and all our actions should be strategic in nature.

What do I mean by strategic change? While making changes, we should remember that even minor changes may have specific implications. And when discussing changes, we ought to consider them not at a given point, but the entire area of possible interactions. And in this regard, I believe and hope that the police reform will be one of our most successful stories.

Of course, we hope and not only hope, but we are also convinced that the police will get a new visual, external appearance as a result of these reforms, but, more importantly, doubly important, this is the new content that we should get in the police as a result of these reforms, and this should lead to institutional changes in the field of law enforcement in terms of social relations and the atmosphere in the country, as well as in terms of law-abidance and crime prevention.”

Issues related to the main directions of police reforms, the process of development and implementation of the strategy were discussed during the meeting, including the structural changes in the police force, new approaches to staff recruitment and management, refurbishment, training programs, the development of necessary skills, etc.

The Prime Minister instructed those responsible to complete the development of the reform strategy as soon as possible and submit it for discussion.