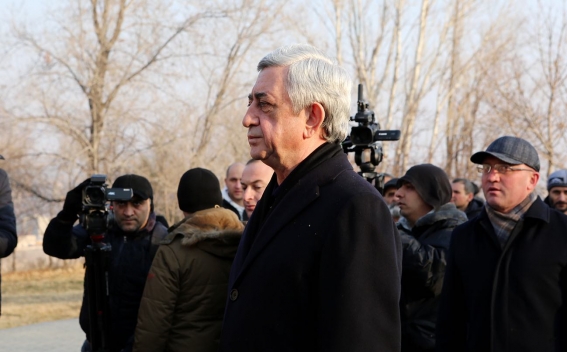 First of all, I cordially congratulate our Armenian soldiers, officers, generals and commanders, our brave freedom fighters and merited veterans of the Armenian army, as well as the sons of our nation who have made great contributions to the development of our army, see their sons off to the army with joy and join the army on a voluntary basis whenever it is necessary. This is what third President of Armenia Serzh Sargsyan told reporters at Yerablur Military Pantheon today, News.am reports.

"Our army is a glorious and triumphant army. There have been people who have tried to discredit our army, but they have failed because, to a great extent, our army has proved its ability to protect the security of Armenia, the Armenian people and our compatriots in Artsakh several times. On this sacred day, I wish for us to keep our faith in the army strong. I am certain that, with your help, our army will always be reliable, and our people will always see our army’s successes," Serzh Sargsyan said.

When told that Prime Minister of Armenia Nikol Pashinyan has accused him of having the intention to deliver 7 regions of Nagorno-Karabakh, Serzh Sargsyan said the following: "So, you persistently want me to touch upon some fictitious statements on this great day?"

He refused to answer further questions and left.