Macron: Poland, Germany and France to Lead Europe After Brexit 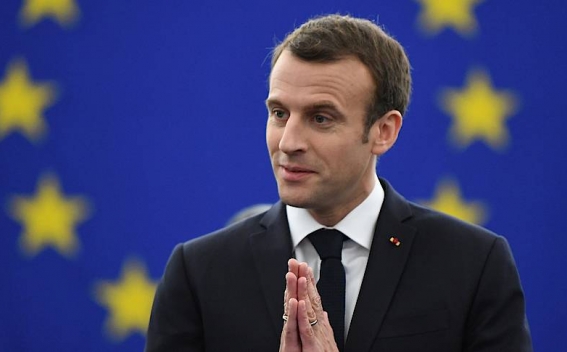 French President Emmanuel Macron on Monday called for closer ties with Poland in shaping the European Union without Britain, in European security and relations with Russia, Euronews reports.

Following talks in Warsaw with Polish President Andrzej Duda, Macron also called for a revival of trilateral ties with Germany, urging a summit meeting before the summer, following years of hiatus.

He said the three countries “bear responsibility for Europe's future” and should resume that role, especially after Britain's departure last week.

Later in the day. after talks with Prime Minister Mateusz Morawiecki, Macron said his trip to Poland was “pretty special, a few days after Brexit, because it also shows our will, between strategic partners, big European powers, being able to ... reactivate a productive dialogue and make our Europe stronger, more sovereign, more united.”

Duda said the 27-member EU should become more efficient and attractive “so that no one will want to leave it.”

Macron has previously been critical of Poland's right-wing government and its policies of refusing to accept migrants, continuing reliance on coal and trying to bring the judiciary under political control.

His predecessor, Francois Hollande, canceled a visit in 2016 after Warsaw scrapped a planned purchase of French helicopters.

Macron said he would like his visit to be a “turning point” in bilateral relations and for any misunderstandings to be cleared up.

Relations with Russia have been a sticking point, as Poland pushes for increasing sanctions on Moscow for its seizure of the Crimea Peninsula while France is seeking dialogue.

“France has not become pro-Russia, like I hear sometimes, France is neither for nor against Russia. France is pro-European, " Macron said.

"It is not our interest to have a situation where we don’t face up to our relationship with Russia, letting unsolved conflicts pile up and misunderstandings persist,” he said.

Later, he said the dialogue he and German Chancellor Angela Merkel resumed with Russia has proven efficient and brought progress, including in the form of the exchange of prisoners between Russia and Ukraine.

“Let's not be naive, but dialogue allows (us) to find common solutions,” Macron said.

Macron expressed concerns over the changes Poland's right-wing government of the Law and Justice party is making to the judiciary, bringing it under political control, and urged a more intensive dialogue with the EU's executive body to end a conflict on Poland's rule of law record.

“I spoke with President Duda with the honesty we owe each other as European partners, about the concerns that the ongoing reforms of the judicial system have given rise to," Macron said.

“I wish for the dialogue with the European Commission to intensify in coming weeks because I know that the values of freedom and justice are ingrained in Poland and throughout its history,” he added.

Duda said this first visit by a French president to Poland in many years had “breakthrough value” for Poland.

Following his talks with Morawiecki, Macron spoke of the need to increase the European military presence in Africa's Sahel region where troops are fighting jihadists. France said Sunday it was sending 600 soldiers to raise the number of troops there to 5,100.

The French delegation includes the ministers of foreign affairs, defense, finance and the environment.

On Tuesday, Macron will travel to the southern city of Krakow where he will visit Wawel Castle and give a speech at the Jagiellonian University on European cooperation and values.

His agenda includes meeting with French expatriates in Poland and Polish intellectuals.