President Sarkissian Meets with Representatives of IT Companies 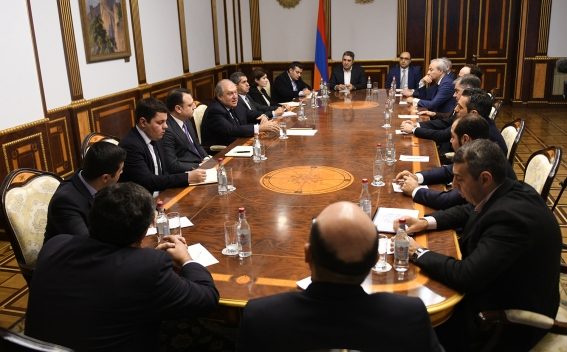 President of Armenia Armen Sarkissian met with the representatives of IT companies, the Presidential Office told.

President Sarkissian highlighted the development of new technologies, stating that it’s necessary to unite efforts to make Armenia a country of modern technologies. In this context he introduced the presidential initiative ATOM (Advanced Tomorrow) on science and technology development in Armenia, noting that this project, consisting of three parts, aims at bringing leading IT companies to Armenia to engage them in the implementation of programs in artificial intelligence, math modeling, educational programs. The President informed that there are already preliminary agreements with two dozen companies.

Armen Sarkissian also touched upon the Armenian Summit of Minds which will take place in Armenia this year and will be dedicated to artificial intelligence and geopolitics. He also introduced the Horasis-China international conference within the frames of which several dozens of Chinese companies will visit Armenia.

The IT representatives attached importance to the meeting with the President, his support to Armenia’s technological development and stated that they are ready to cooperate and come up with proposals.