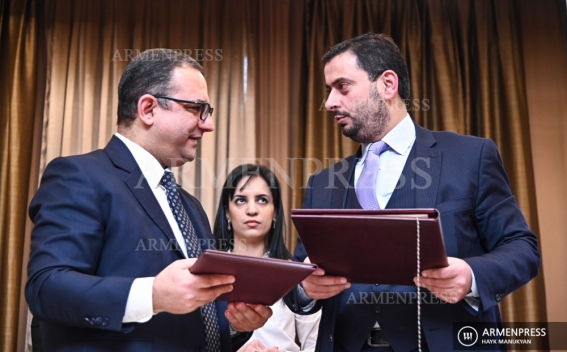 Yerevan hosted the Armenia-Jordan Business Forum on February 10 as part of the Jordanian King Abdullah II’s official visit to Armenia.

King Abdullah II will be on a two-day official trip to Armenia from February 10, Armenpress reports.

At the forum, Jordanian businessmen said they see prospects for cooperation with Armenia in the areas of tourism, agriculture, energy and other sectors.

"The economic figures aren’t big now, both imports and exports are in very modest numbers. We organized this forum in order for the business representatives to know each other, to get to know the business opportunities which exist in Armenia, in Jordan, create closer cooperation and as a result record greater initiatives on implementing commercial and joint investment programs," said Tigran Khachatryan, Armenia’s Minister of Economy.

Jordanian Minister of Industry, Trade and Supply Tariq Hammouri said they have a clear instruction from King Abdullah II – the close political relations between Armenia and Jordan must reflect on the economic ties.

Hammouri said there are numerous sectors that Armenia and Jordan can cooperate, especially in IT. "Armenia is pretty advanced in this area. Jordan also has serious prospects in this sector," he said.

Jordanian Chamber of Commerce head Al Kabariti said that as business representatives their mission is to increase the level of economic ties. "Armenia has a very good competitive arena, particularly agricultural products, we see clear prospects for making investments in the tourism sector, he said.