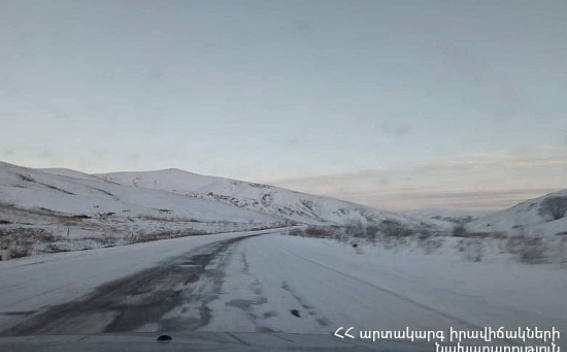 According to the Ministry of ES of RA on February 11 by 09:00 some roads in Armenia are closed and difficult to pass.

The roadways leading to Amberd fortress and lake Kari of Aragatsotn province, Martiros-Sers roadway of Vayots dzor province and Abovyan-Jraber roadway of Kotayk Province are closed.

Vardenyats Pass, Saravan-"Zanger" (snowstorm) roadway are closed for trailer trucks and difficult to pass for other vehicles.

Jermuk-Gndevaz (snowstorm), Sotk-Karvachar, as well as the intercommunity roadways of Aparan and Aragats regions of Aragatsotn Province are difficult to pass.

Black ice is formed in some places on the roadways of Kotayk, Gegarkunik, Lori, Shirak and Syunik Provinces and on roadway Vayk-Saravan of Vayots dzor Province.

According to the information provided by the Department of Emergency Situations of the Ministry of Internal Affairs of Georgia and from the Department of Crisis Management Center of the Republic of North Ossetia of the Ministry of Emergency Situations of the Russian Federation Stepantsminda-Larsi highway is open for all types of vehicles.