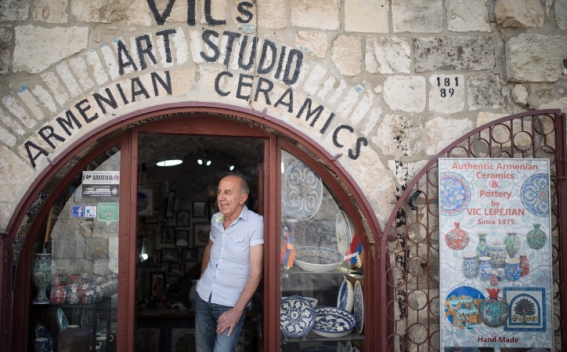 Turkey has been conducting extensive activity within Jerusalem’s Old City and has specifically been targeting the Armenian and Christian Quarters, as The Jewish Press reports, TPS has learned.

Residents have told TPS about efforts of Turkish officials in recent years to persuade them to deny the Armenian holocaust perpetrated by the Turks a century ago and other actions to acquired property owned by local Christians.

One resident told TPS about a Turkish diplomat who proposed to the Kahabadijan family, which owns a small museum with a rare collection of thousands of photos and documents on the Armenian holocaust, to cease its activities and to avoid disseminating documentation and information.

The Kahabadijan family has dedicated their lives to the commemoration of the Turkish massacre of the Armenians and has produced several short films on the subject.

Ilya Kahabadijan, whose grandfather survived the massacres, told TPS that it was only 40 minutes into the meeting when the diplomat tried to develop a conversation about “the loaded issue. I realized that she wanted to persuade me to cease my activity to preserve the Armenian massacre.”

Ilya emphasized that the Turkish representative did not threaten him, but added that “in any case, I showed her the way out and she understood that the Armenian community is ready to go all the way with the issue of the massacre. We will wait another 100 years, but we will not rescind our demand for compensation until we reach a payment agreement, like the one that Israel signed with Germany. ”

Turkish persuasion attempts include financial grant proposals to Armenians. Property owners in the Quarter say that Turkish government representatives have recently offered several $3000 grants for various needs, but their proposals have been rejected entirely by Armenian residents, who say “these are silencing grants” designed to ensure that the Turkish government will not be sued for the 1915 – 1917 massacres.

The Armenian extermination was a deliberate and systematic genocide perpetrated by the Ottoman Empire during the First World War against the Armenian population in its territory.

Even after World War I, Turks, Kurds, and Arabs continued to massacre Armenians until 1923, and it is widely believed that about half the Armenians in Turkey, about 1.5 million people, were murdered.

Turkey Buying Up the Armenian Quarter?

Turkish pressures are also manifest in its activity to acquire Armenian assets.

TPS learned that a few months ago, the residents of the Armenian Quarter were shocked to find that one of their homes was sold to a Muslim, in three times its real value. An inquiry revealed that funding for the purchase of the Armenian property came from Turkey.

There is still a lingering fear among the Armenians of the Turks taking over or buying more property.

One Christian trader, who asked to remain anonymous, said that the Turks recently transferred to the Jordanian Waqf very old ownership certificates, some crumbling, including Ottoman-era documents and property ownership documents in the Armenian and Christian Quarters.

The trader, who showed TPS photos of several of the certificates, says the Turks have asked the Waqf to verify the documents which are being used to purchase the assets.

The Armenians in the Quarter do not hide their fears of the Turkish initiatives but have expressed confidence that the Turks will not confront them openly because of the sensitivity of the issues.

The growing Turkish activity in Jerusalem and its support for the Muslim Brotherhood are of concern to Israel. In its recent annual intelligence assessment, the IDF Intelligence Division has, for the first time, defined Turkey as a threat.

Israeli officials have often raised the possibility of recognizing the Armenian holocaust as a counter-reaction to Turkish activity against Israel, which includes the hosting of Hamas’ terrorist headquarters in Turkey.

Over the years, Israel has refrained from officially recognizing the Armenian genocide, fearing that such recognition would damage diplomatic relations between Israel and Turkey.

Turkey monitors all publications on the Armenian genocide and considers the issue of great significance to Turkish national security, and accordingly, the Turks have not relented with their attempt to persuade the Armenians in Jerusalem to cease their commemorative endeavors.

In recent years, the influx of Turkish tourists to the Old City in Jerusalem has increased after the mosques were included in tourist routes and following the Turkish government’s participation in travel costs to Jerusalem.

Ilya Kahabadijan said that Turkish tourists in the Old City have also recently been working against the Armenians, tearing up posters and publications about the Armenian genocide. Graffiti inscriptions in condemnation of the Armenians were sprayed on the Quarter’s walls.

The Turkish “Heritage” Society has increased its activities in the city in the fields of education, culture, real estate and welfare, and also carries funding for the “convoy project” to transport thousands of Muslim worshipers to mosques as well as funding tens of thousands of meals to break the Ramadan fast.

Similarly, the TIKA governmental agency for relief and assistance is also very active in several projects in Jerusalem. Dozens of mosques and houses have been renovated by the Turks.

TPS has referred a series of questions to the Turkish Embassy in Israel and the TIKA organization, but no replies were received until the publication of this article, although the embassy reported that the questions were received by them.