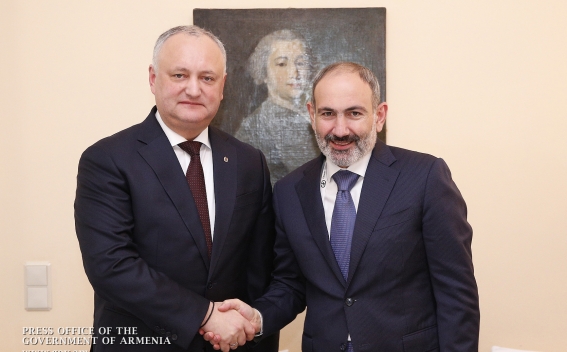 I am very glad to see you again. We often meet at various events within the EAEU, the CIS, and other international organizations. I feel that our frequent contacts should be translated into extensive economic ties. Our political relations are brilliant, but unfortunately, we cannot boast of large volumes in trade turnover.

A primary issue on our agenda is the development and activation of economic ties, holding meetings between our business communities in order to encourage them to find opportunities for enhancing trade between Armenia and Moldova.

I am planning to pay an official visit to Moldova later this year. I recently met with the Prime Minister of Moldova in Almaty. We agreed that my trip ought to be preceded by extensive work on agenda preparations, so that the visit might be as much productive as possible. We have many common interests in both economic and political terms. We are cooperating quite well, yet we have to activate our economic ties."

We managed to hold several meetings during the past one year of our personal contacts. I am very glad that we are actively cooperating within the CIS. As an observer state, Moldova is attending the proceedings of the Eurasian Economic Commission. The EAEU is a priority for us. For the first time, our Prime Minister joined the proceedings this year; prior to that only the President participated in those meetings.

I wish to note that we have developed a hectic bilateral agenda. In the meantime, I can agree with you that the results are not so encouraging in the economic field. If I am not mistaken, our trade turnover did not exceed the mark of 3.5-4 million euros last year, and these are not the volumes that can be talked about as a positive trend. I really hope that this year we will be able to wind up our bilateral relations.

On February 24-25, the President of the Parliament of the Republic of Moldova will pay an official visit to Armenia. Our parliament speaker’s visit, the contacts between the co-chairs of the intergovernmental commission, the intergovernmental commission’s meetings, and your official visit - I think we can organize a business forum during your stay in our country – may go a long way toward boosting our bilateral relations.

Our two peoples boast deeply-rooted friendly relations. There is an Armenian Diaspora in Moldova; we have Armenians involved in parliamentary factions and in the presidential administration, and therefore, we are looking forth to seeing you soon in Moldova. We hope to set a date for your visit to Moldova in the near future and launch the preparations."

During the meeting, Prime Minister Pashinyan and President Dodon touched upon issues that will be discussed at the upcoming meeting of the Armenian-Moldovan intergovernmental commission. They noted that the meeting will focus on the documents to be discussed during Nikol Pashinyan’s official visit to Moldova. The visit is scheduled for the first half of this year.