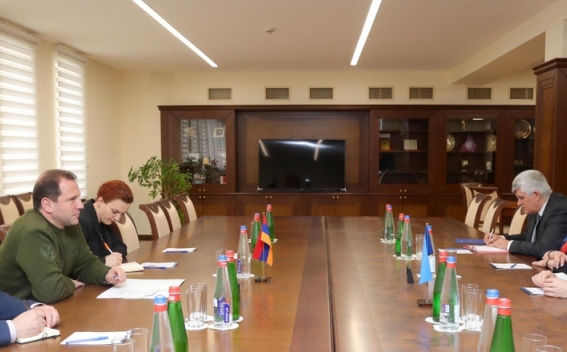 Minister of Defense of Armenia Davit Tonoyan today received the delegation led by Special Representative of the European Union for the South Caucasus and the crisis in Georgia Toivo Klaar. Head of the EU Delegation to Armenia, Ambassador Andrea Victorin also attended the meeting, News.am reports.

At the request of the guests, the defense minister talked about the situation on the Armenian-Azerbaijani state border and the line of contact of the armed forces of Artsakh (Nagorno-Karabakh Republic) and Azerbaijan and the recent developments.

In his turn, Toivo Klaar stated that the EU fully supports the efforts of the OSCE Minsk Group Co-Chairs for the settlement of the Nagorno-Karabakh conflict and is ready to make its contribution to intensification of the talks in that format.

During the meeting, the parties also touched upon the Armenia-EU cooperation and issues related to regional security.