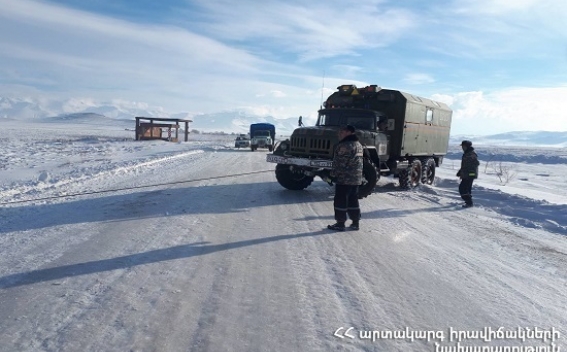 According to the Ministry of ES of RA since February 20, 10:10 some roads in Armenia are closed and difficult to pass.

Vardenyats pass is closed for the trailer trucks and is difficult to pass for other vehicles.

According to the information provided by the Department of Emergency Situations of the Ministry of Internal Affairs of Georgia and from the Department of Crisis Management Center of the Republic of North Ossetia of the Ministry of Emergency Situations of the Russian Federation Stepantsminda-Larsi highway is open for all types of vehicles but the flow of trucks is in limited quantities.

According to the information received from the Ministry of Emergency Situations of the Russian Federation, Republic of North Ossetia, there are 335 trucks accumulated on Russian side.