"Interaction between Armenia and Artsakh is the key to our people’s security": Nikol Pashinyan 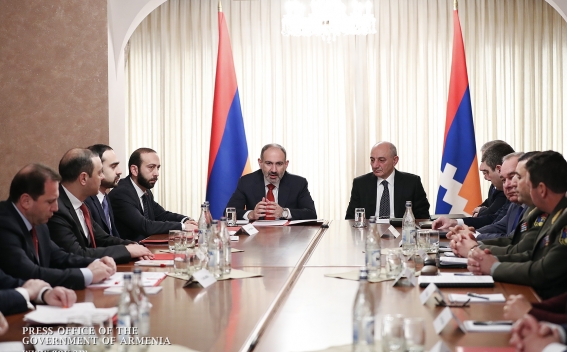 In general, I think that we have made quite effective efforts to that end, and that work has reached its culmination as we were able to state that the Armenian and Artsakh authorities have identical perceptions concerning the settlement of the Artsakh issue. This does not mean however that we just share the same vision on all details; it means that we actually have the same vision in strategic terms, which is anchored on several key pillars.

In this regard, I consider it crucial that in fact, a new content of the negotiations on the Karabakh issue is being shaped, or to put it precisely, has been formed in our joint work. I believe that this content represents the interests of the Republic of Armenia and the Republic of Artsakh in a more comprehensive way. Secondly, this content is constructive in terms of generating new opportunities for solving the problem.

And in this regard, I consider it important to state that the discourse that took place on the sidelines of the Munich Security Conference, during which this content was clearly formulated. We can conventionally call it the Munich Principles.

In general, I can state that as early as in 2019, the Government of the Republic of Armenia took serious steps and invested huge resources to implement significant and tangible changes in the army, starting from the acquisition of state-of-the-art armaments and ending with the additional social guarantees for officers, rank and file and monetary payments. As a result, we all expect that discipline, moral and psychological atmosphere and relations in the army will be taken to a new level, and I believe that this problem is really solvable.

As regards our security environment, I think we should state another such reality. Of course, the Armed Forces are the primary pledge and the main guarantor of our security, but I wish to note that while exercising this mission, the Army should never be left alone and its burden should be eased. I think that in the end we must state that democracy is one of the important guarantees, and it should strengthen the security of the Republic of Armenia and Artsakh.

We know that national elections are going to be held in Artsakh in the near future. I think that the elections held so far have demonstrated the existence of completely different realities in the Republic of Artsakh and the Republic of Azerbaijan, which once again proves that Artsakh and Azerbaijan can never be in a common political space, because for a long time now the level of democracy in Artsakh has been several times higher than in the neighboring country. I do believe that this trend is irreversible and will find its reflection in the upcoming general and presidential elections. And I consider it very important for the authorities of Artsakh and Armenia to abide by similar ideas and approaches in this matter.

Our countries’ economic competitiveness is another key security element. The economy is supposed to provide the Armed Forces of Armenia and Artsakh with the necessary resources to fulfill their functions, and today we will discuss issues of strategic economic importance. On the other hand, we must acknowledge that unfortunately, the security situation is getting worse in our region: we see more escalation than solutions, and this should be discussed at the Security Councils’ joint session.

I am pleased to state that the approaches of the authorities of Armenia and Artsakh are identical in this matter and our mission and commitment is to enhance our national security, promote regional security and contribute to global security. This is also an important issue on our agenda and one of the key topics of our cooperation, and we are effectively cooperating in this direction, and I am confident that our joint efforts will become more and more effective. In conclusion, let me wish us all every success and productive work.”

In his remarks, President Bako Sahakyan dwelt on foreign and domestic policy priorities, specifically concerning the latest developments, the process of army building, the implementation of a number of strategic social and economic projects in the southern regions of the republic.

Noting that the proposed programs are ambitious, but quite feasible, Bako Sahakyan voiced his firm conviction that they will be implemented through joint effort and consistent work.