Some Roads are Closed in the Area of the Republic 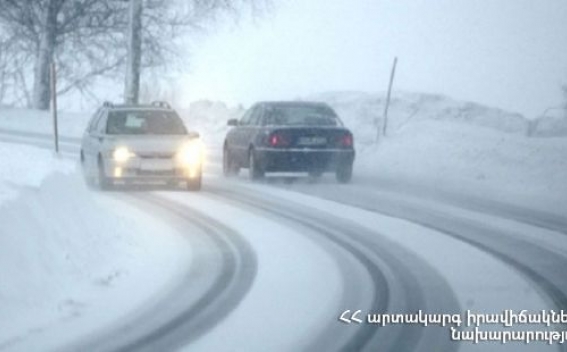 According to the Ministry of ES of RA on February 25 by 10:00 roads in Armenia are mainly passable.

Vardenyats pass is closed (there is snowstorm) for all types of vehicles.

It is snowing in Shirak province, in Jermuk town of Vayots dzor province, in Vanadzor town of Lori province and on Saravan-''Zanger'' section.

It is snowstorm in Gyumri town and in Ashotsk village of Shirak province.

On February 25 throughout the day, snowstorm is predicted in the northern regions, especially in separate mountainous areas, snow and snow showers are predicted as well.

According to the information provided by the Department of Emergency Situations of the Ministry of Internal Affairs of Georgia and from the Department of Crisis Management Center of the Republic of North Ossetia of the Ministry of Emergency Situations of the Russian Federation Stepantsminda-Larsi highway is closed for trucks and open for other types of vehicles.

According to the information received from the Ministry of Emergency Situations of the Russian Federation, Republic of North Ossetia, there are 483 trucks gathered on Russian side.