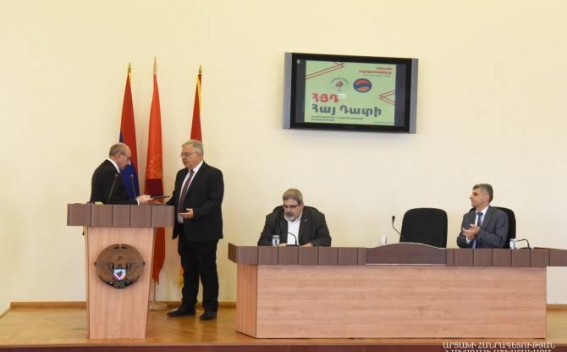 Artsakh Republic President Bako Sahakyan participated on February 25 in the opening of the conference of the ARF Armenian National Committees and Offices launched in Stepanakert, the Presidential Office told Armenpress.

In his speech, President Sahakyan noted that the Hay Dat is the pan-Armenian structure that has been fighting for decades for the solution of our national problems, keeping Artsakh in the spotlight. "It is impossible imagine the protection of Artsakh's interests on the international arena, dissemination of true information about the state of Artsakh in different countries and instances, the steps taken towards the international recognition of the Artsakh Republic, the establishment and deepening relations with many states and their administrative units, the implementation of various programs in our republic without the active participation of the Hay Dat, its extensive and dedicated work," the President of the Artsakh Republic emphasized in his speech.

During the event, President Sahakyan awarded the Central Board of the ARF Hay Dat with the "Gratitude" medal for active work undertaken towards the international recognition of the Artsakh Republic, its significant contribution to cementing and widening the Artsakh-Diaspora ties.