The People of Karabakh Have the Right to Freely Determine Their Political Status without Limitations: Armenia's FM 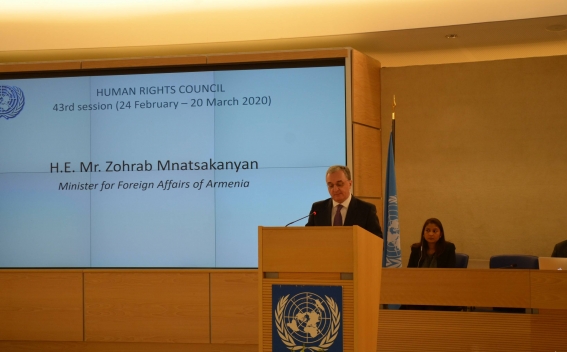 Below is the full text of  Foreign Minister’s remarks:

''I am delighted to be back in the Human Rights Council to represent a country that is now a full-fledged member of this august body.

As we celebrate the 75th anniversary of the United Nations we strongly believe that its mission should be reemphasized and strengthened. The three pillars of the United Nations are important and mutually reinforcing. We recognize the centrality of human rights exactly in the context of its powers to release talent and capacity of the human being for the individual and common good in any society, which values freedom and unrestricted civil participation. We also share the concern of Secretary General Antonio Guterres, that human rights are under assault. Reflecting on his wake up call globally, Armenia extends its full support to the Call for Action and the seven target areas as defined by the Secretary General.

Our accession to the HRC accompanied the important progress Armenia has been making since the victory of the non-violent, peaceful Velvet Revolution in April and May 2018. Our reforms are widespread, they are based on staunch support and massive mandate of the Armenian people, and the strong political will of the Government to advance democratic transformation with tangible deliverables to the principal beneficiary of the reforms, the citizen of Armenia. Our reforms embrace every aspect of securing fair and solid institutions to sustain democracy, the rule of law and human rights. Achieving a genuine independent and impartial judiciary is a cornerstone of our present reform agenda. The Constitutional referendum to be held on 5 April is aimed exactly at advancing the reform of the judiciary with the direct participation of the citizenry of Armenia.

Armenia’s progress has been duly reflected in several international rankings and indexes. According to Corruption Perception Index of the Transparency International, in 2019 Armenia has improved its ranking by 28 points. In the World Press Freedom index of the Reporters without borders Armenia made an improvement of 19 notches within just one year. Last year Armenia recorded significant progress on freedom of internet and ranked among the top 10 free countries.

Armenia’s accession to the HRC coincides with the third cycle of the Universal Periodic Review that we have undergone this January. We are grateful and most encouraged by the broad recognition of Armenia’s reform efforts, as reflected in many interventions during the UPR. I would also wish to emphasize the centrality of the national level of responsibility for human rights, as our responsibilities are first of all before our people. Of course, we recognize the UPR as a ''jewel of the crown'' in the HRC framework and will do our best to further consolidate it.

Armenia’s transformation firmly relies on strong involvement and active political participation of women and youth. This is also an important premise in our international cooperation. Armenia is presently chairing the 64th and 65th Sessions of the United Nations Commission on the Status of Women. We will continue to consistently work towards building international consensus for the empowerment of women.

The Human Rights Council remains a critical platform within the United Nations for the strengthening of international capacities to prevent mass atrocities and genocide, a subject that Armenia has been championing for many years. We intend to table an updated draft resolution on the ''Prevention of Genocide'' for consideration at this session of the Council. We are looking forward to open, engaging and constructive informal consultations with States and other stakeholders. We are convinced that this Council, its special procedures, as well as the Office of the UN Secretary General’s Special Adviser on the Prevention of Genocide should sustain their leadership in promoting and strengthening the prevention of massive violations of human rights, genocide and mass atrocities.

Armenia remains fully committed to the peaceful resolution of the Nagorno-Karabakh conflict within the internationally mandated format of the OSCE Minsk Group Co-chairmanship and underlines the priority of security and status for Nagorno-Karabakh. The people of Nagorno-Karabakh have the right to freely determine their political status without limitations, and freely pursue their economic, social and cultural development by virtue of the right to self-determination. This is at the core of the peaceful resolution. Armenia also underlines the importance of denouncing hatred and intolerance and investing serious effort in promoting human contacts. Equally, the threat of force is firmly ruled out. Armenia and Nagorno-Karabakh are committed to building further on the modest results achieved in 2019.

Promotion and support to full enjoyment of human rights for people residing in conflict areas must represent a collective objective for the international community. Human rights and those who exercise them cannot be defined as a problem. They are the solution. I recall yesterday’s powerful message of the Secretary General, ''Every measure to uphold human rights helps ease tensions, deliver sustainable development and sustain peace''. On 31 March the people of Nagorno-Karabakh will cast their votes at presidential and parliamentary elections in fulfilling their legitimate right of organizing their lives in a democratic manner. The commitment of Nagorno-Karabakh and its people who endured war, siege and aggression, who continue to face the threat of war, to sustain a strong democratic society and institutions for the protection of human rights deserve full international support. Human rights and fundamental freedoms should be respected, protected and promoted without distinction of any kind, including ''the political, jurisdictional or international status of the country or territory to which a person belongs.''

In conclusion, Madame President, Armenia reiterates unwavering commitment and support to the United Nations human rights machinery, as it represents an essential platform for international cooperation. At the same time, the primary responsibility firmly rests with member states. The efficiency of the human rights system is addressed and tested exactly on such grounds.

Thank you very much''.