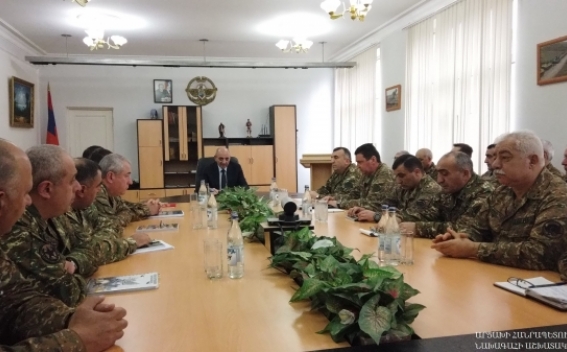 On 26 February President Bako Sahakyan visited the Artsakh Republic Defense Ministry.
The President introduced to the supreme command staff of the Defense Army defense minister, commander of the Defense Army, major- general Jalal Haroutyunyan appointed upon his decree.
Bako Sahakyan rated high the professionalism of major-general Jalal Haroutyunyan, noting his extensive experience in troop management and wishing him success in a performing his duties.
President Sahakyan thanked former defense minister, commander of the Defense Army Karen Abrahamyan for his service, highlighted his great contribution to the army-building process, wishing him success.
Chief of the General Staff of the Republic of Armenia Armed Forces Artak Davtyan and other officials were present at the event.