Daughter of Emir of Kuwait Told about Her Armenian Grandmother, who Survived the Armenian Genocide 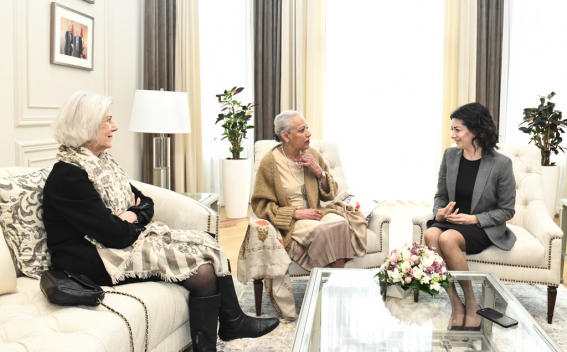 During the conversation, Sheikha Hessa Saad al-Abdullah Al-Sabah shared her impressions of Armenia and stressed that she visits the country with special warmth every time. She told about her Armenian grandmother, Elizabeth, who lived in Zeytun during the Armenian Genocide, migrated and reached the desert of Deir ez-Zor where she met her future husband and the grandfather of Sheikha Hessa Saad al-Abdullah Al-Sabah. The Sheikha went on to say that her Armenian grandmother played a major role in her life and constantly pushed her to receive an education and fight to achieve her goals.

During the meeting, the parties considered several directions for cooperation and reached agreements.

Daughter of the 14th Emir of Kuwait, Sheikha Hessa Saad al-Abdullah Al-Sabah is considered a successful businesswoman and the first woman who started her own business, inspiring many Arab women. She is an active defender of women’s rights and manages several committees, including the Arab Council of Businesswomen, the Kuwait Volunteers Women Society, the Kuwait Businesswomen Committee, the Arab African Woman Council and the Women’s Affairs Committee.